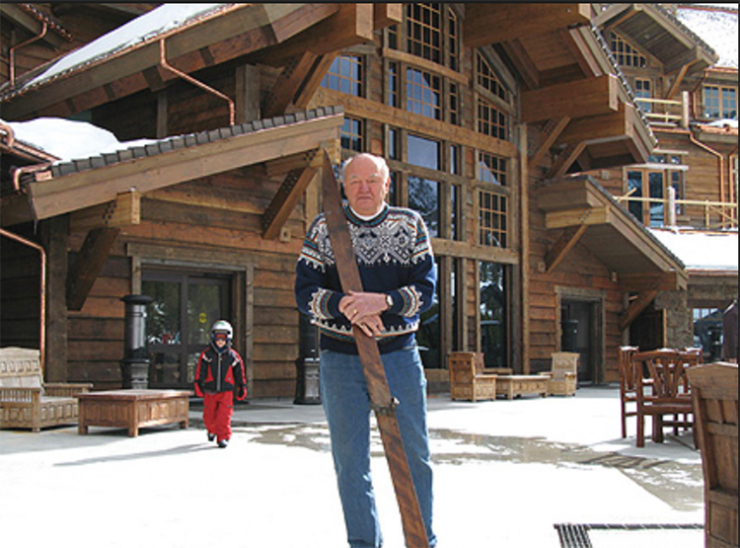 All good things must come to an end. The ski season is slowly winding down. This is the time of year to stop by the ski shop and see if that special pair of boots or skis that you have been wanting all winter has been discounted below the 50 percent mark. You know that you’ll want them next winter when they cost twice as much.

Yesterday, I finally succumbed and bought that pair of skis that are just the right length, stiffness and tortional rigidity and will allow me to ski in the powder snow for at least one more year, although I’m really counting on two more winters of powder so that I can still be doing it when I’m 80 years old. I keep asking the people I ski with, “If you didn’t know when you were born, how old would you be?” This philosophy really came into focus last week when we were filming a sequence for next year’s feature length ski movie.

I skied all day in 10 inches of goofer feather powder snow with three friends of mine here at The Yellowstone Club. Shauna is a professional EMT ski patrol and guide; Eric can ski better than any real estate agent I have ever met; and his wife Brandy is a former ski racer and works in the public relations department. While we were waiting for cameraman, Gary Nate, to change film in his movie camera, we exchanged information on our ages. It turned out that I was one year older than the combined ages of the three of them.

I tagged along on the filming expedition, directing Gary on what and where to shoot. Every now and then, when the snow was backlit just right, the sky was cobalt blue, the trees were far enough apart, and the hill wasn’t too steep, I made a few turns in front of the camera for the first time in almost 15 years. At my age, with a 16-inch steel rod in my right leg, three ace bandages around that worn out right knee, and a recent bout with cancer radiation treatments, I know that I can’t turn a pair of skis as easily or as well as I did 50 years ago or even last year. (Anyone who says that they can ski as well at 50 as they could at 20 wasn’t very good when they were 20.)

The only similarity between my body or a pair of skis today and 50 years ago is that my body is more worn out and the skis are still turned up in the front and cost a whole lot more. Describing the 50-year difference in technology of ski construction would take an entire book of technical writing that I’m incapable of gathering at this time. All I know is that the new designs allow me to be able to ski in about the same places as I did last year. However, this year’s model skis are allowing me to do stuff on steeper hills than I have been able to ski since I broke my leg five years ago.

Even though I get to ski every day all winter, I never get bored doing it. For whatever reason, the pure gut feeling of making a turn on the side of a hill is something I look forward to every day from late November until the middle of April. Unfortunately, it is almost the middle of April and the season is coming to an end. Four inches of new powder snow has fallen during the night. It’s the seventh snowfall in the last 11 days and everyone here is pale faced from a winter of almost constant snowfall. The season is winding down and I’m packing up the house to get back to sea level and a summer of fishing, crabbing and cruising in our boat.

Moving to and from a ski resort every year is time-consuming, frustrating, and after doing it for the last 20 years, a little boring. However, to be able to ski for 75-100 days a winter is a privilege that not very many people in the world have, so I’m very grateful.

Since you have gotten this far in reading my column, chances are you are one of a large group of people who have supported my lifestyle ever since I walked out on the stage and narrated my first feature-length ski film in October of 1950. To you individually and collectively, I want to say thank you for supporting my lifestyle all of these years. If I’m lucky, I’ll spend the summer lurching from one near disaster to the next and I will be writing about my escapes as they happen.

Stay tuned until the snow falls again because I will be sending you my take on everything from skateboard parks, to catching Dungeness crabs in our boat. So until next fall, same time same place, my advice for your summer is, “Don’t take life seriously because you can’t come out of it alive.”