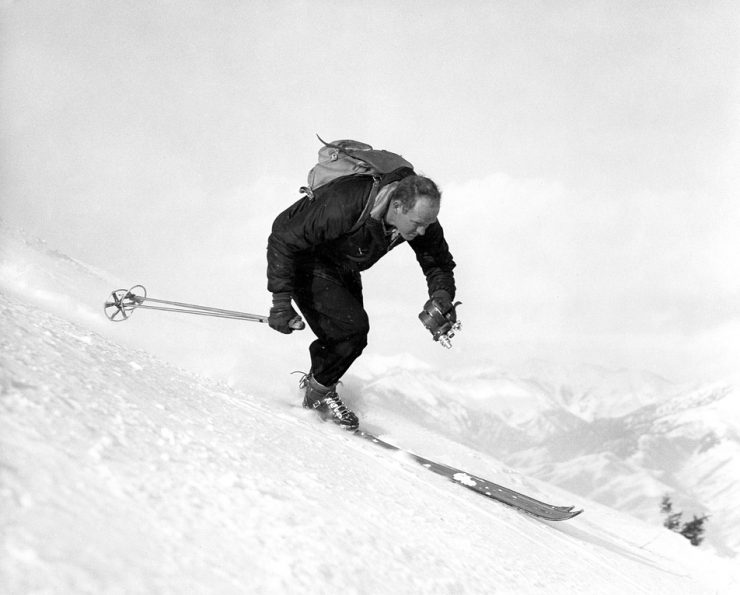 A small percentage of our population is particularly lucky because we are skiers or snowboarders. Some of our spiritual roots reach back to European pioneers who first dragged their skis to the four corners of the white world. For some people, skiing is an old bond. It’s a bond with the mountains, the snow and our skis and it’s important to us because it is everlasting, it is alive, and it will always be that way.

Up here in the mountains, your lungs can grab sharp gulps of air so clear and cold that it sometimes makes your brain hurt.

It is up here that you come to terms with your own individual high-pressure, get-it-done-in-a-given-time-frame type of work. When you weigh work time against ski time, work loses every time.

I have been very lucky my whole life because I already have almost a century of years behind me of trying to make my next turn on skis a little better than the one I have just finished while searching all over the world for that elusive thing called freedom. I have been luckier than most people because I was able to make a living while I was searching for it. I grabbed images with my camera to not only document my search for freedom, but also to share my worldwide search with tens of thousands of other people, every year for the last 55 years.

It is really fortunate for us winter riders that whoever or whatever created this Earth did a few things right. They covered two-thirds of the planet with water and when it evaporates from the oceans, it is carried eastward on the wind and across the land-masses that cover the other one-third of the earth. There, the moisture is thrust upwards by the mountains, where the water vapors condense, cool and fall to the ground in the form of rain, hail, sleet or snow. Whoever designed the Earth’s thermostat also did that exactly right because when the snow falls, it covers any blemish the earth might have and creates a wonderful playground just for us so we can slide on a pair of skis or a snowboard. It’s a great playground that never changes, yet never stays the same.

I enjoyed and documented the freedom of skiing in the back bowls of Vail when there was no one else there except the four skiers I was filming and myself. Yes, that’s right, only five skiers in the back bowls of Vail for days on end. I showed those movies in 1963 and said, “Get out here to Vail and buy some of this land because they aren’t going to make any more of it.” A few people followed my advice and bought a ski-in, ski-out vacant lot for $10,000, with a pair lifetime lift passes thrown in to seal the deal. The grandchildren of one of those original purchasers recently sold one of those lots and a 40-year-old, 2,000-square-foot house for $14 million.

One Tuesday in January during that first winter Vail was open, they only sold eight lift tickets. The resort was nothing more than a gondola and two double chairlifts coming up from the highway. Today, Vail has as many as 23,000 people skiing and snowboarding on the same day. Unfortunately, with so many high-speed quad chairlifts today, it is almost impossible at Vail (or anywhere else) to get more than one untracked powder run before the hill is all cut up. Of course, that one run is worth getting to the chairlift at least an hour before it opens so you will be at or near the head of the line.

In 1962-63, there were no short, fat skis to make it so easy to ski powder. A few skiers of extraordinary ability skied on seven-foot-six-inch stiff skis in that powder snow of Vail and Aspen, Sun Valley, Stowe, Mammoth and Squaw and led the way so many other people could follow. They were the pioneers who paved the way for you.

By the time you get good enough to enjoy carving turns in powder snow, your every movement has been programmed into your biological computer. Regardless of your age, gender, or how well you turn your skis, that turning ability has been imprinted on half a billion brain cells and then spliced into every muscle, bone, cartilage and organ in your body. The tracks you leave become the refinement of every turn you have ever made in your life. Chances are that on the way down, you will let out a long, loud cry that is essentially a cry of love, life and freedom and perhaps is even a bit religious. In reality, it’s a wild, passionate cry of ultimate pleasure as you fly and float down the mountain completely free.

Think about that the next time you glide down a mountain that has been covered with a deep mantle of white that has temporarily erased every blemish that the earth might have had.