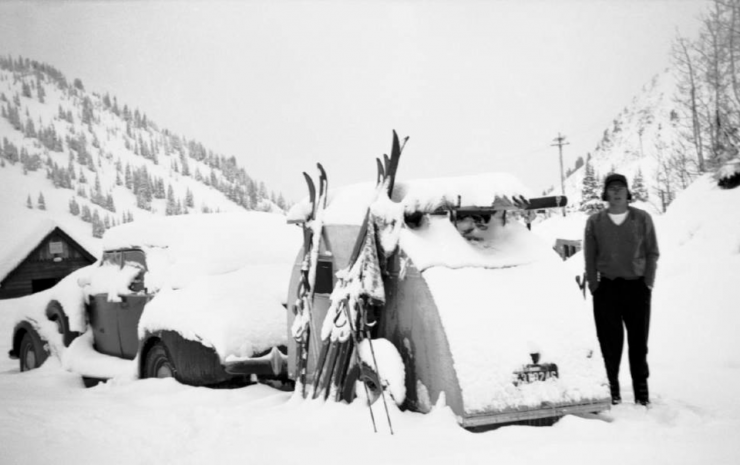 All great fads tend to repeat themselves and I guess ski-bumming is no different. I thought the true ski bum was obsolete, but Bode Miller has proven me wrong. The big news on the World Cup Circuit is that Bode will be traveling from race to race in a 30-foot luxury motor home with a king-sized bed and a chauffer-chef.

It’s a far cry from the small trailer I parked in the Sun Valley parking lot during the winter of 1947. Our little trailer cost a whopping $200. It slept two, had an outside stand-up kitchen and was light enough to be towed by whatever car I had available at the time. The “Bodemobile”, as it has been aptly named, is slightly more luxurious and his reasons for resorting to a mobile home are slightly different, but the concept is still the same: sleep where the snow is and hop on it first thing in the morning. It’s called convenience and Bode is no dummy.

I have many years of experience living in ski resort parking lots. My experience comes from another time long, long ago, when lift tickets were $4 a day and Ed’s beds in Aspen were $3 a night. Bode is trying to simplify his life by eliminating the constant moves into different hotel rooms and I can see why. I remember sleeping in many parking lots and on many floors when I traveled from race to race one winter.

Of course, Bode might find that he has sacrificed one set of problems for another. One big problem that Bode might have is digging his motor home out if a blizzard hits while it is parked. In 1948, we raced at the Sugar Bowl and the Donner Ski Ranch in the California State Championships and it snowed four feet. When we woke up, the snow was two-thirds of the way up to the top of the trailer. Once we got dressed and out in the snow, I didn’t bother to dig out the kitchen in the back. I had to dig out the trailer and the car and then put on the chains to drive to the Donner Ski Ranch for the slalom. Once there, we had to pack the slalom hill and then run the slalom in ruts that were two-feet deep after the fifth racer.

Hopefully, Bode’s experience will be a little different from mine. After all, he can afford the luxury Bodemobile because of his 3-year contract with the Italian pasta maker, Barilla. So, I’m assuming that with his earnings from wearing pasta-colored racing clothes, he can hire someone else to dig out his motor home for him.

There must be some sort of connection between pasta and world cup racing. I can see it now, with Barilla taking over the key advertising spots on all of Bode’s pasta-colored racing suits. Hey, Barilla already has at least 243 free ad impressions from the people who have read this column.

Things were a little different in 1948 because racers hadn’t even started to use duct tape to keep our pants from flapping and slowing us down. Our agents could have sold advertising space to the duct tape company if a racer had thought of using it and if we had agents.

Think of all the marketing opportunities with the “Bodemobile.” If Bode parks the RV in the right place and has it designed properly, his chef-chauffer could sell “Bode Miller Pasta Pans” from the back of it when Bode is off winning races. He could even autograph the pans after he wins the race.

The fact that he has a chef-chauffer makes his parking lot existence a whole lot more palatable than mine. As soon as Bode steps off the podium, his chef-chauffer can drive him to his next ski race. He’ll have a great parking place in the secure area with the media vans. Furthermore, his chef-chauffer will prepare gourmet, high-energy food and serve him in his private dining room just a step or two away from his king-sized bed.

If Bode really wants to “ski bum” in style, he’ll need to add a satellite telephone that also receives radio and TV signals to pass the fleeting moments when he has nothing else to do. That way he can really concentrate on that elusive .003 seconds in the flat midway between the fourteenth and fifteenth gate. (The last race results I read said, “The man who came in 30th was .0034 seconds behind the winner.”)

I applaud Bode for being so forward thinking and climbing into that motor home and ripping up the race courses and sleeping in parking lots all over Europe. It worked for me when I lived in the eight-foot-long trailer and that was 56 years ago. After Bode proves that it still works this year, next year there will be dozens of racers and racer chasers with their own motor homes parked within walking distance of every race course in Europe. I’m sure the real estate companies are already leasing those meadows just in case.