For skiers and movie goers alike, the name Warren Miller is synonymous with superstar.

From such world-renowned resorts as Vail, Colorado; Verbier, Switzerland and Blackcomb/Whistler, Canada to the lesser known peaks of Dumbai, Russia, Manali, India or Beidahu, China, Warren Miller is famous for bringing the sport of skiing to the big screen. Recognized worldwide as the most radical sports filmmaker of our time, Miller was once described by an L.A. Times columnist as a “combination of Jean-Claude Killy, Robert Redford, Ingmar Bergman and Woody Allen.” 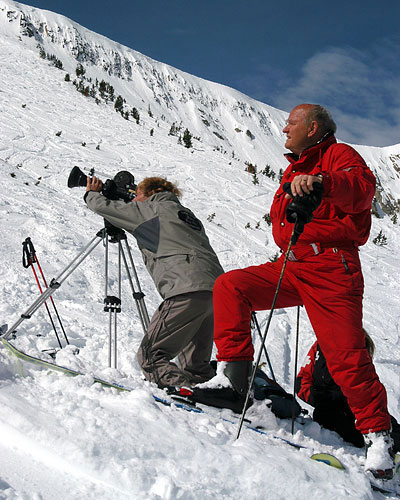 Hollywood born and raised, Miller was in the right place at the right time to begin the filming side of his career. In 1947, he travelled to Sun Valley, Idaho, to perfect his skiing technique.

Two years later, while teaching a couple of young Bell & Howell executives how to ski, he combined his skiing + filmmaking talents after convincing the pair to lend him a camera to photograph local skiers. Little did Charles Percy (who went on to become an influential US Senator from Illinois) and Hal Geneen (who rose to chairman of the board at ITT) know at the time the significant of their contribution to the world of sports films.

Miller’s first feature film, titled “Deep and Light,” was produced on a shoestring budget of about US$500. Touring with the movie and providing a personal narration, he established a tradition that is now synonymous with his name.

Miller was once described by an L.A. Times columnist as a “combination of Jean-Claude Killy, Robert Redford, Ingmar Bergman and Woody Allen.”

Besides being a member of the Ski Hall of Fame, Miller has been honored with a number of awards for his achievements, including 10 CINE Golden Eagles, eight IFPA awards, the distinguished International Documentary Achievement award and the US Ski Writers Associationâs Golden Quill award. Videos of his most popular films enjoy worldwide distribution, while readers can delight in flipping through the pages of “Wine, Women, Warren and Skis”, and “On Film in Print”, both of which were written and illustrated by Miller.