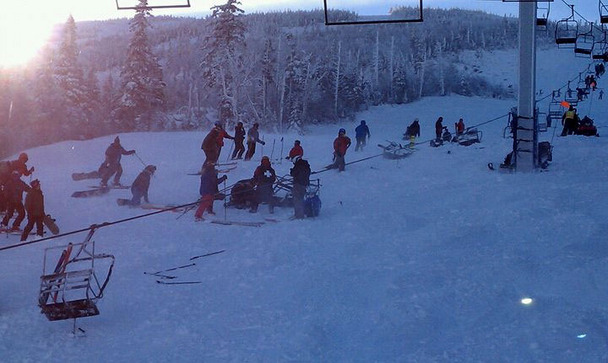 The Spillway East Chairlift at Sugarloaf, Maine, experienced a rope derailment Tuesday morning, with seven people reported injured. The injured persons, including three children, were treated and transported to local hospitals. None of the injuries were believed to be life-threatening. The remaining guests on the lift were evacuated within two hours.

Eyewitnesses said that five chairs fell 25 to 30 feet to the ground. One noted that the 20 to 22 inches of new snow that fell the day before softened the fall. Ski patrol personnel were on the scene in minutes, said one person who was on the lift. Another told the Bangor Daily News, “The lift stopped a couple of times and then inched forward a couple of times. When we started to go we felt some pretty intense vibration on the cable that wasn’t right.”

The Spillway East chair is a Borvig double chair manufactured and installed in 1975. It was modified in 1983. Spillway East is 4,013 feet long, with a vertical of 1,454 feet. Last August, Sugarloaf officials indicated that replacing the chair was a top priority for the summer of 2011.

In a statement, Sugarlaof said that the chairlift receives routine daily inspections for safety along with weekly, monthly and yearly maintenance and testing. The lift is also inspected annually for safety by the state tramway safety board.

Operations on the Spillway East were delayed Tuesday morning due to the wind, which diminished by mid-morning. Resort personnel checked the lift prior to opening, said resort spokesman Ethan Austin. He added that conditions at the mountain were windy, but not atypical for Sugarloaf immediately after a major snowstorm.

“We’re deeply concerned about those who were injured,” said Austin, “and we’re committed to understanding the cause of this incident. We want our guests to have fun, but our first priority is their safety.”

In a statement, the resort expressed its gratitude to all the safety personnel who responded to this incident.

The Spillway East chair will remain closed until the preliminary investigation is completed and the lift is cleared by the State of Maine to resume operation.