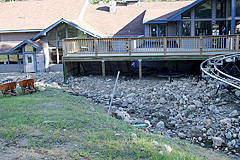 The remnants of drenched northern New England and caused extensive flood damage to resorts, from Okemo and Killington in Vermont to Attitash, N.H., and Sugarloaf, Me. Flooding in many locations was the worst on records dating to the 1930s.

The Killington K-1 Lodge collapsed due to the rushing waters, and the village at Okemo sustained significant erosion damage as well. Mud piled up against many structures in the base area of both resorts, and much the same was true at Attitash. The New Hampshire area’s Mountain Coaster was closed for inspection of the support structures.

Reports of more damage are sure to follow as resorts examine the storm’s aftermath and communications return to normal.

What’s known already is that many resort towns and major skier roadways were heavily damaged. Businesses flooded and roads washed away as streams quickly overflowed their banks.

Southern Vermont was one of the hardest-hit areas. Major roads and bridges washed out in the towns of Bennington, Wilmington, Jamaica, Ludlow, and Rutland. Reports indicate heavy damage in the Stratton-area towns of Bondville and Londonderry as well.

Mount Snow escaped major damage, according to early and unofficial reports, and the installation of the area’s new six-pack bubble chair was not affected in a major way.