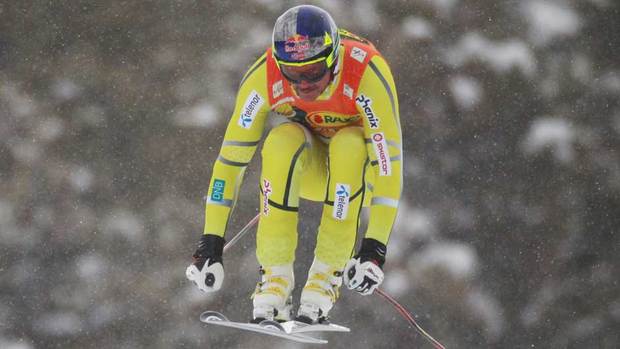 Svindal estimated he skied twice as much in the off-season as Hudec, who finished just off the podium in fourth Sunday.

“With that amount of skiing I would never be fourth,” Svindal declared. “That guy has not skied a lot the last few years. He’s always injured. I skied with him this summer. He had back problems and could barely ski. Now he’s fourth. Impressive.”

If not for a mistake near the bottom of the course, Hudec felt he had a shot at his first World Cup podium since 2007 when he won the downhill at Lake Louise. Skiing a tight line near the edge of the course, the 30-year-old Calgary native lost speed when he hit soft snow.

“I knew that was the end of my victory dance, but you never know where you’re going to end up,” Hudec said. “I didn’t panic or completely throw (the skis) sideways, but I could feel myself slow down there.

“You’ve got to put your head down and keep going.”

Hudec, who was 12th in Saturday’s downhill, substituted a high leg kick towards the cheering crowd in place of a victory dance.

He’s undergone seven major surgeries in his career, not counting “little stuff like broken arms and shoulders,” he says.

Back problems kept him off snow over the summer. Hudec started cramming for Lake Louise just two weeks out from the event.

“Even after a week of skiing I wasn’t really far behind at all,” he said. “Maybe a little bit with my fitness because I couldn’t do much this summer because of my back.

“In the gym, I rode my bike and got cardio fit. I ended up being probably the lightest I’ve ever come into a season which isn’t necessarily the best for gliding, but I feel really good on my skis in the turns.”

Erik Guay of Mont-Tremblant, Que., bounced back from 44th in the downhill to finish sixth in super-G. Guay, too, missed summer snow camps with the national team because of a herniated disc in his back. Hudec was inspired by Guay’s run.

“For a guy that struggled yesterday to come back and perform like that the next day, it boosted the morale of the whole team,” Hudec said. “That’s what I did when I went up the chair. I said ‘Erik had an amazing run, but I can beat him.’ That’s the mentality you have to have on a team and it worked out today. We had a great team result.”

Falling snow and gusting winds at the top of the course reduced visibility, so organizers lowered the super-G start 158 metres to what is traditionally the women’s start hut.

With a pair of podium results in the season-opening speed events, Cuche opened a strong defence of the World Cup downhill and super-G title he won last season.

“If you want to win speed races, you’re probably going to have to beat Didier Cuche in a lot of races this year,” Svindal said.

Cuche pounced on an errant football thrown by fans into the athletes’ area. The 37-year-old threw it back like a quarterback yelling “Not bad for a Swiss.”

“If somebody would have told me before I came here I would be first and second, I would never believe them,” Cuche said.

With a major weather front moving in, intervals between racers were shortened to get all 67 men quickly down the hill. The course claimed 10 athletes who crashed or missed gates, including Rob Dixon of Whistler, B.C., and Dustin Cook of Lac Sainte Marie, Que.

Despite comfortable -3 C temperatures. Spectators weren’t as numerous as they’d been for the downhill the previous day when the stands in the finish area were packed.

“It was uncomfortable to be in that position, asking for help,” he said. “Without the people that came out to support me I wouldn’t have been at this race this weekend.”

Ben Thomsen of Invermere, B.C., was 27th and Louis-Pierre Helie of Berthierville, Que., was 53rd. Helie said he’s one of at least four skiers he knows of whose skis were stolen from near the chalet the previous day. His teammate Cook managed to re-locate his pair that went missing.

Helie’s were new giant slalom skis with his name on them, but he doesn’t expect to see them again.

“I have tons of pair of skis, but they’re my skis,” Helie said. “I don’t want them walking around everywhere.”

The men travel to Beaver Creek, Colo., for a downhill, super-G and giant slalom Friday through Sunday respectively.