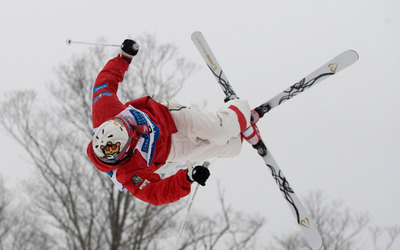 Bryon Wilson of the US won the men’s event after Bilodeau lost control during the middle section of the final dual; the reigning Olympic and Dual Mogul World Champion was forced to throw a huge old-school double-daffy off the final kicker instead of his signature back flip.

The final was an indication of how the day went for Rosemere, Que.’s Bilodeau, who pointed out that the relatively-short course with icy bumps, “wasn’t easy but it was easy to make mistakes.

“You need to be on that course, when you go faster your chances are doubling and quadrupling of making mistakes, I think we were going pretty fast today and that was my strategy all along, but I also made mistakes.”

In fact, Bilodeau, who took most of last season off, said he was lucky just to have made it to the 16-man finals.

“I got a pretty good gift in the morning,” he said of his 13th place qualification run. “I didn’t ski well in qualifiers, but I got to go to finals and I made the best out of it. I also make mistakes in my two last duals in the middle section.

“All of this just shows me there’s still place for improvement. I don’t know if it’s that I’m not really comfortable with racing, it’s been a while, I don’t know if that’s the case, but there’s still stuff I want to improve. I think that with Mike (Michel Hamelin) I have the best coach in the world, so I should be able to work with him over the Christmas break to improve before the next race,” said Bilodeau, who added, “Hey, it’s duals, anything can happen and you never know until you’re over the finish line. I think my experience was what gave me the edge today.”

Kingsbury explained that the best strategy on a short course is to go as fast as possible at the start to get ahead.

The 20-year old lost a dramatic semi-final dual to Bilodeau to put him in the small final against teammate Philippe Marquis of Quebec City.

Kingsbury said, “Alex and I went pretty all out in our dual, with two big back fulls on top. I think Alex blew out a little and I kept going, but then I caught an edge before the final air and went forward, I think I did a front flip on the bottom air, I’m not too sure. Losing control like that is not the kind of thing I do normally, but we were going all out, just a little too fast for both of us.”

Against Marquis in the small final, Kingsbury said that Marquis was ahead in that dual until he picked up a little too much speed and lost control in the middle section, Kingsbury finished the run looking composed and confident and the bronze was his.

The medal was the 16th consecutive FIS Freestyle World Cup podium for Deux-Montagnes, Que.’s Kingsbury, who retains the yellow bib, although he is now tied in points with Bilodeau after two competitions this season.

“That’s pretty crazy, it’s consistency I think. I’m happy, I don’t think there’s anything magic, to wining 16 medals in a row, I’m just training to do my run every week,” he said.

Marc-Antoine Gagnon of Terrebonne, Que was fifth and Cedric Rochon of St. Sauveur, Que. was 10th in the 16-man final. Pascal Olivier Gagne of Montreal finished 26th and Quebec City’s Simon-Pouliot Cavanagh did not finish.

On the women’s side, it was the second win in two events for Heather McPhie of the US who beat her teammate Heidi Kloser in the final. Montreal’s Justine Dufour-Lapointe edged Britney Cox of Australia for the bronze.

Dufour-Lapointe, the youngest of three Canadian sisters on the mogul tour also mentioned that her strategy was to have a strong, fast start on the course.

Referring to her semi-final run against McPhie, the 18-year-old said, “Against Heather I really pushed myself and gave it everything I had. I finished first for the time, but the points were 18-17 for Heather. When I finished the race I really thought I won, I’m not exactly sure what happened, I’ll have to look at the video,”

In the small final dual against Cox, Dufour-Lapointe said, “I gave everything and didn’t make any mistakes.”

Noting that for the second week in a row the entire Canadian women’s World Cup team made it to finals, Dufour-Lapointe said, “That’s so cool, we have a really strong team and we have a strong coach team, I think we’re going to do great this season. I’m happy, it’s a good start to the season.”

FIS Freestyle action continues on January 5 with an aerial event in Changchun, China.