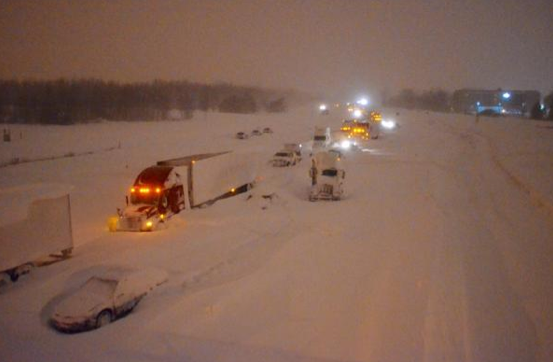 With cold and snow sweeping through much of the Rockies and the eastern half of the country, resorts there are opening ahead of schedule and with more terrain than usual. There were nearly 50 resorts open today, with more than 80 ski areas opening this weekend.

Meanwhile, snow remains in short supply on the West Coast.

Not in Buffalo, N.Y., though. Heavy snow is blamed for seven deaths in New York where a lake-effect storm dumped up to six feet of snow in just 24 hours in some neighborhoods. Another round of lake-effect snow was forecast to develop over the region today into Friday.

Some nearby resorts were getting in on the action, too. In Glenwood, N.Y., Kissing Bridge received about 18 inches from the storm, and was forced to cancel its regular Friday night fish fry due to the weather conditions, travel bans, and the fact that many of its employees were stranded in their homes. The resort posted to its website that “every effort is being made to stockpile snow as we head into warmer weather this upcoming week.” The area was still targeting to open after Thanksgiving.

Bristol Mountain opened for its 51st season today with two trails on a 6- to 24-inch base. “We couldn’t be happier,” said Drew Broderick, Bristol’s spokesperson. “Our snowmaking team has been working very hard since last Friday night when they started up the snow guns, the very low temperatures have been perfect for snowmaking.”

Elsewhere in N.Y., Holiday Valley, Hunter, and Windham are among those opening this weekend.

In Quebec, Mont Tremblant will open Nov. 21, with 16 trails, two of which will be top to bottom. Le Massif, Mont Saint-Anne, Stoneham, and Mont Habitant plan to open Nov. 22.

In B.C., Whistler Mountain is opening this weekend, five days ahead of schedule, with two and possibly three lifts running on the upper slopes, accessed by the Creekside and Whistler Village gondolas. Sun Peaks is also starting operations this weekend, thanks to favorable snowmaking weather.

In Pennsylvania, Big Boulder Park opened its terrain park today with free lift tickets for those who brought 15 can goods or a $20 new toy for the Boulder Gives Back Toys for Tots drive. Meanwhile, Blue Mountain will open Saturday with four lifts servicing 10 trails on a 24-inch base. It’s the earliest opening in the ski area’s 38-year history. The areas plan to then close until Black Friday, when they and several other Pennsylvania areas plan to open.

In New Hampshire, Cranmore Mountain Resort bumped up its opening by a week, offering top to bottom skiing and riding, with five trails and two lifts operating this weekend. “This is one of the earliest weekends we have opened for skiing and riding,” says Ben Wilcox, president and GM. Two lifts will service four trails. The resort will reopen on Friday, November 28th, and will operate weekends before going to daily operations on Saturday, Dec. 13. Pats Peak opens Saturday, two weeks earlier than anticipated, with six trails and a mini-terrain park set up on the Gusty trail.

Those areas join a host of other Eastern areas, from Sugarbush and Mount Snow, Vt., to Waterville Valley, N.H., and Wachusett, Mass., that are opening this weekend also.

In the Midwest, more than a dozen areas were open today, with dozens more opening this coming weekend. Many are opening ahead of schedule, and with lots of terrain ready. Wild Mountain, Minn., will have 100 percent of its terrain open.

In the U.S. Rockies, several resorts are opening this weekend. Snow throughout the range has resorts off to a solid start.

Grand Targhee Resort in Wyoming opens Nov. 21 for its 46th season after having received more than 56 inches of natural snow to date. Targhee will be spinning three lifts. “We received more than two feet of snow in the last week and there is more snow in the immediate forecast, said Ken Rider, director of marketing and sales. “We should be seeing more skiable terrain and lifts opening soon.”

In Colorado, Vail Mountain also opens Nov. 21 with more than 500 acres of terrain. “Conditions on the mountain are even better than we initially anticipated and thanks to the hard work of our mountain operations team, we’re thrilled with what we’ll be able to offer to guests,” said Chris Jarnot, executive vice president and chief operating officer of Vail Mountain. Further south, the Crested Butte Nordic Center reports some of the best early season conditions on record. As in years past, Crested Butte’s Thanksgiving opening day will be free for skiers and riders.

In California, Heavenly, Northstar, and Kirkwood are opening this weekend. In the Northwest, Schweitzer, 49 Degrees North, and White Pass are among those initiating operations.

And finally, in North Carolina, Sugar Mountain had enough snow to open its new slope, Gunther’s Way, earlier than it had expected. Previously, the ski area bumped up its opening to Nov. 2. “An early opening is cause to celebrate, but who thought we could open Gunther’s Way on November 20th? It’s a proud moment and one that we will remember,” says Gunther Jochl, president.