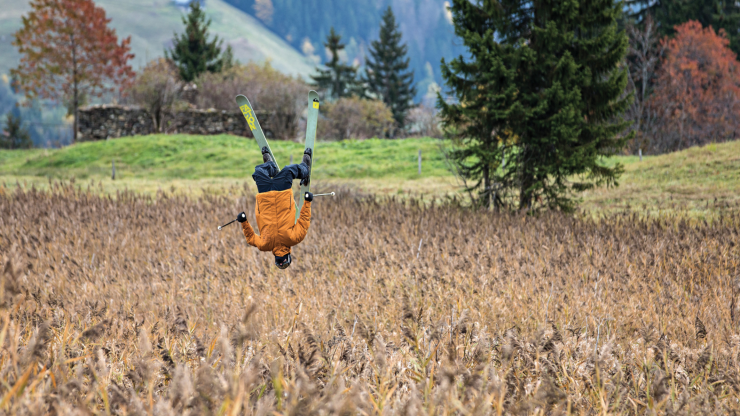 Candide Thovex doesn’t wait for winter and he prefers to Ski The World! Quattro2, also named Ski The World, is Thovex’s follow up to his first Audi film “quattro” and by all counts the setting is much more exotic than his first.

0n December 8th, 2015, Candide released his first advertorial film for Audi to promote their latest Quattro Q7 model. The video, created, produced and directed by Candide, featured Candide skiing and performing tricks on many surfaces including dirt, grass, fallen leaves and asphalt, but no snow. It was viewed over 1 million times on the first day on Candide’s YouTube channel. It was viewed 2.5 million times in the first 3 days and has been viewed over 7.5 million times since being posted to his official YouTube and Facebook accounts. Powder, a reference in the sport of skiing summed it up simply on the website of the magazine: “Candide doesn’t need snow.”

In October 2016, ‘Candide Thovex – quattro’ won two prizes at the Top/Com Grands Prix Consumer 2016 awards held at the Congrès de la Communication Consumer in Paris. The competition rewards the best advertisements and advertising campaigns of the year in France in a variety of categories. The film won the best ‘Publicité On Line’ and the Prix Spécial de l’Expression.

About Candide Thovex
A French national, born 22 May 1982, and a professional skier, filmmaker and entrepreneur. He is notable for his creative movies to the sport of freestyle skiing, and professionally has won numerous contests and accolades. He first caught the attention of the world of outdoor and action sports by jumping Chad’s Gap, a massive transfer jump of 37m from take-off to landing over a 12m deep gully in Alta, Utah. His point of view videos routinely go viral on the internet and are viewed by millions. He is widely considered to be one of the best freeskiers in the history of the sport. 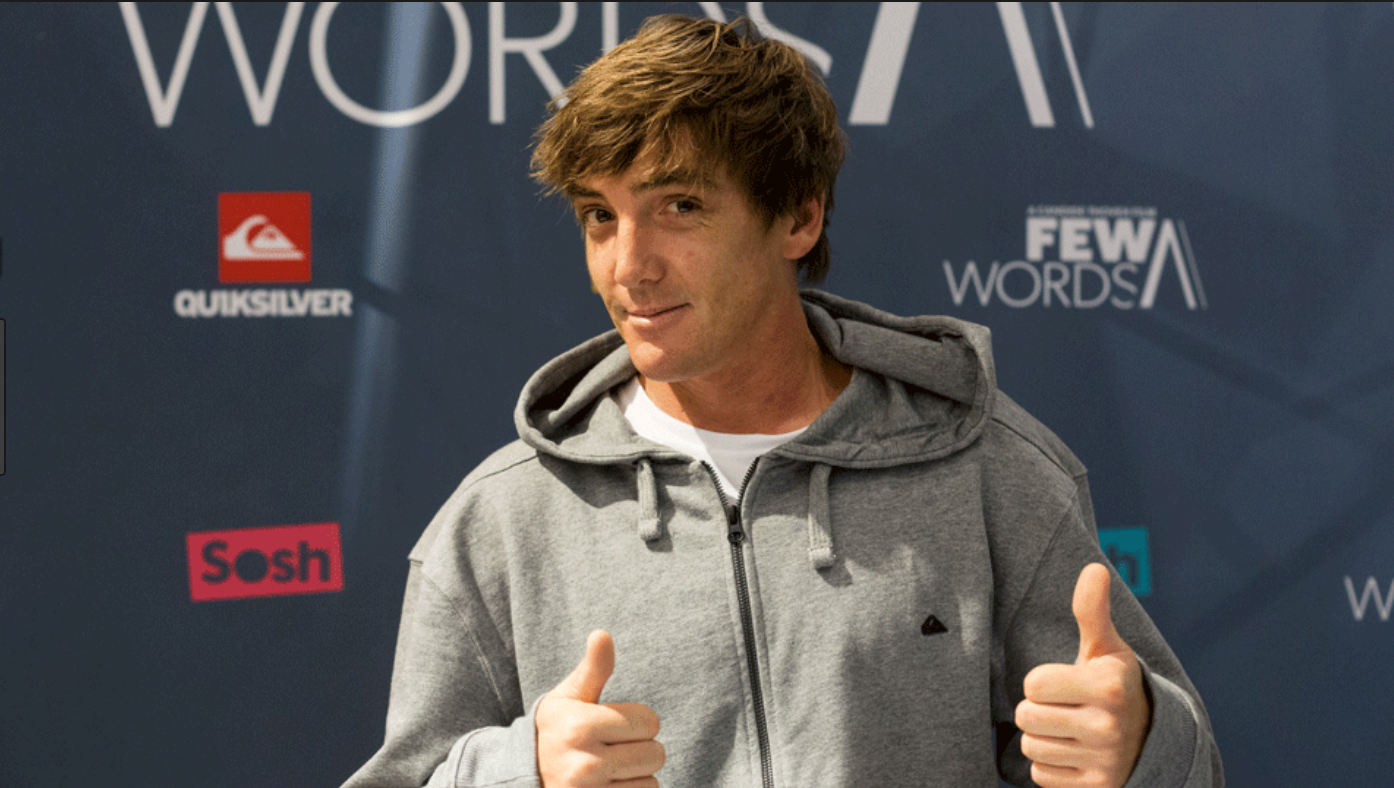 Candide moved from 10 years of professional freestyle skiing into big mountain freestyle and filmmaking in 2008. Returning from another injury, Candide signed on to ride for Coreupt skis. He also put all his energy into his event, designing features of all shapes and sizes to blend in perfectly with the terrain. At the same time, he started skiing again, but only in perfect powder and far from the crowds. He rode alone, with the exception of his sole companion, Simon Favier who was there to capture all of the action on film. He didn’t compete in a single contest. He was simultaneously putting together his first documentary feature ‘The Candide Invitational Story’,.

The final product of his adventures riding and filming with Simon Favier was entitled ‘Candide Kamera’ and was released in 2009. The images were focused exclusively on riding in the backcountry and big mountain freestyle. Wanting to continue in the same vein, Candide spent the entire season riding powder and filming.

After winning a number of major freestyle contests, 2010 marked a sensational return to competition, but now Candide had turned his sights on unspoiled and unforgiving backcountry faces. However, he wanted to keep things discreet since he hadn’t competed since his injury. His comeback started with an invitation to compete in the Red Bull Line Catcher in Vars, France, a prestigious hybrid event, which blends freestyle and freeriding. He was nervous and unsure of his ability to keep up with the other competitors. In spite of his uncertainties, he went on to win the contest. A few weeks later, Candide Thovex was invited to and won the Chamonix stage of the Freeride World Tour. The win in Chamonix was a deciding factor that convinced him to compete on the tour for the entire season. He finished in second place at the following event. At the last event of the season, the Verbier Xtreme on the face of the infamous Bec des Rosses in Switzerland, Candide laid down a solid run for an equal 3rd-place finish. The result was just enough to clinch the title of World Freeride Champion.

Candide’s fascination with the art of filmmaking has always entertained him. Over the course of his professional career he has starred in, and produced numerous videos. Including numerous video segments, Candide starred in WW production’s Rastafaride 7th Heaven. In 2011, he set to work on a project to document his past with an eye on what the future held in store for him. He skied and filmed the best backcountry conditions available on the planet.

The film ‘Few Words’ was released in 2012. It was an immediate success. The French cable TV channel Canal+ immediately purchased the exclusive rights to the film in Candide’s home country for a period of 2 years, showing it a countless number of times. It was also a bestseller worldwide on iTunes, and in 2013 received the highest honors on offer at the renowned Powder Awards put on by the American ski magazine of the same name; best male performance, best documentary, best cinematography, and the most prestigious of all, the “Full Throttle” award for the most outstanding all around performance of the season. The film was also played to sold out theatres on a 24-country world tour. The same year, Candide joined forces with Faction Skis to develop a complete range of signature models; meanwhile all the products in his signature model line with longtime sponsor Quiksliver continued to be best sellers.

One of Those Days

Candide decided to devote his 2013 season to producing a new video entitled ‘One of Those Days’ filmed almost exclusively with his helmet-mounted camera. Filmed entirely from his point of view, ‘One of Those Days’ was claimed by Powder magazine editor John Clary Davies “The best skier on the planet at his home hill. This is the most fun I’ve ever had skiing and all I did was sit in my office and press play. Movie of the Year. Edit of the Century. Done.”

One of Those Days 2

Released in January 2015, ‘One of Those Days 2’ pushed the boundaries even further. The video was viewed by more than 1.3 million people per day in the first week, and more than 13 million times in less than 1 month alone. The international media also picked up on the story with articles and video embeds on major websites such as The Telegraph, BBC, The Independent, USA Today, Sports Illustrated, Outdoor, Fox Sports, Stern, Mundo Deportivo, Paris Match, l’Equipe, and Le Point. Candide has also made live appearances on CNN and France’s Canal+ to talk about the video, which has also featured in other televised reports on TF1, France2, and M6 in France, as well as 1TV in Russia, and on the leading European sports channel, Eurosport.

On January 21st, 2016, Google released a video entitled: ‘Explore Mont Blanc with Kilian Jornet, Ueli Steck, Candide Thovex, and Google Maps’ to promote the Street View of Mont Blanc in Google Maps. In the first 4 months it was viewed over 2.6 million times. Google describes the list of individuals who took part in the project as “legendary adventurers”. Candide’s role in the project was to help build a jump on top of the Mont Blanc and then perform tricks off of it. It is a feat that French travel and photo magazine GEO says on their website is “unprecedented”. In an interview posted on the website of French lifestyle magazine Paris Match, Candide said it was “the hardest jump of my life.” On its website, the top French ski magazine Skieur called it “another first for Candide Thovex” and described him as a “true ambassador of skiing”. On the Powder magazine website the article covering the event called Candide a “skiing legend”.

One of Those Days 3

On February 23rd, 2016, Candide released ‘One of Those Days 3’, the last in the series of his point of view ski videos. For the last chapter in the trilogy the production values were higher and a police chase scenario ran through the film. Like the first two, the third episode went viral rapidly with over 6 million views in the first 3 months. France’s TF1 network titled their web article ‘The virus that is contaminating the web’. On the websites of French media outlets such as 20 Minutes, La Dépêche, and France Info all featured pieces on the video calling Candide “the king of freestyle”. The international press took interest in the release. In their online editions, magazine’s like GEO and Adventure Journal as well as The Daily Telegraph newspaper all made comparisons between Candide and James Bond. The international news network CNN covered the video release as well. The website article took particular interest in Candide jumping over a helicopter with its rotors turning. It quotes Candide saying, “I don’t think I would do it again. It was definitely kind of scary. You don’t want to finish like a ham.” The article then goes on to confirm that, “As well as not ending up like a ham, he also jumped over a paraglider and a peloton of cyclists, skied across a lake and water-skied behind a helicopter in his latest YouTube edit.” In the specialized ski press, Powder (USA) magazine said, “The third installment of One of Those Days might be the best yet, as Candide Thovex outdoes himself again, setting the bar in ski edit creativity.” After praising the first two edits, Elemental Adventure (UK) expressed the same sentiment on their website, “This time Candide raised the bar to another level.” Mountain sports website, Mountain Watch (AUS) called it, “quite likely the greatest ski video ever”. Mashable, the global, multi-platform media and entertainment company presented it on their website as “the most insane ski video ever created”. Pitch (UK), a leading independent sports and entertainment marketing agency stated, “Singlehandedly Thovex is taking freesking into the mainstream and cementing himself as a household name in the process.”

The King of Freestyle helicopter stunt 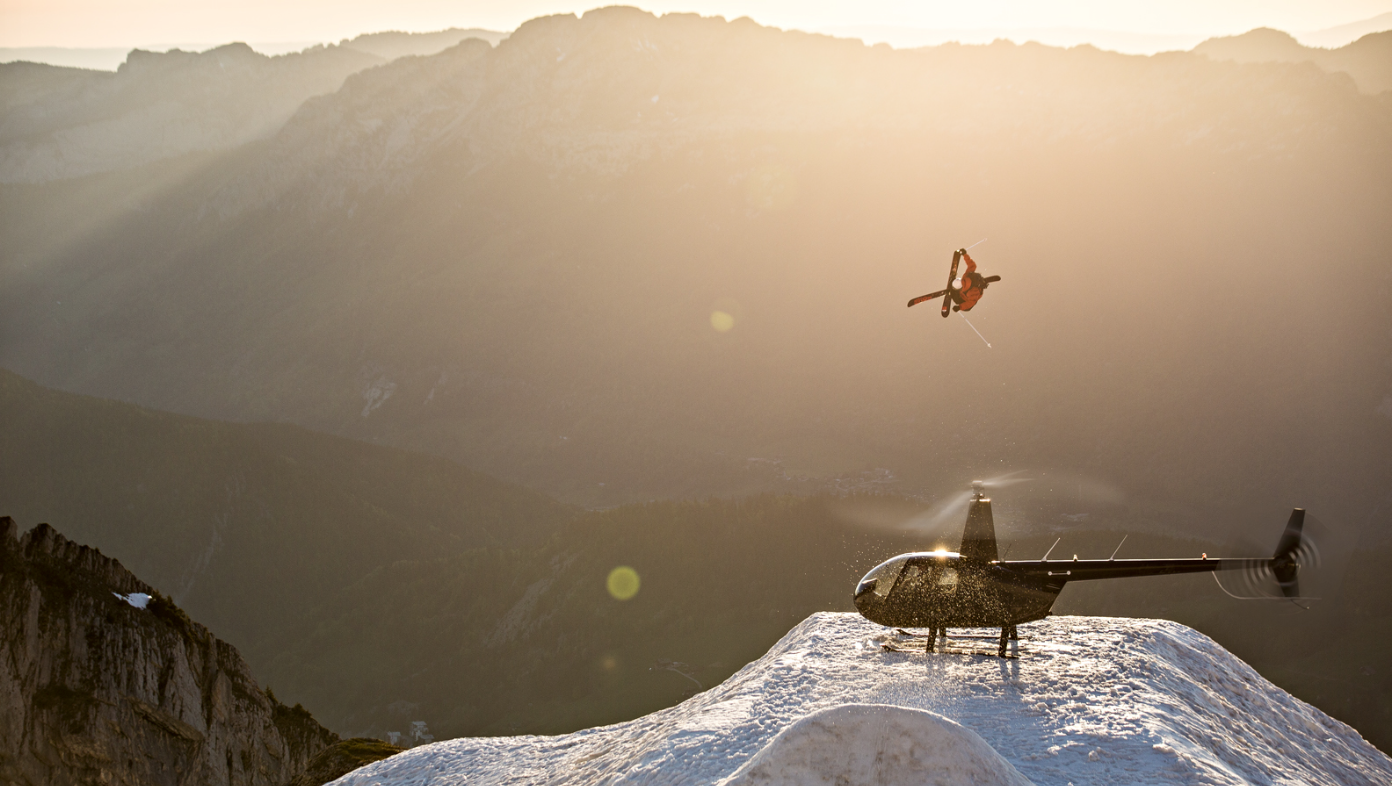 Following the success of One of Those Days 3, Candide created a competition where the public was asked to try to emulate his style of skiing, filming and editing. He called it “One of Your Days”. The contestants posted videos to the contest website. Candide chose his 10 favorites, and the public had the final vote. The winner, Carter McMillan was awarded with a day skiing with Candide at his home mountain of La Clusaz, France.

On March 5th and 6th Candide participated in a promotional event organized by FISE in China. March 11th and 12th, 2016 Candide competed in the 3rd edition of the B&E Invitational in Les Arcs, France. It was his only contest appearance of the year. He won 2 of the 5 categories on offer, taking the prize for the Beatcan Best Line, and was named the E-Adrenaline Public Choice Winner. The edit of Candide’s performance at the event posted on his Facebook page has been viewed over 1.7 million times. 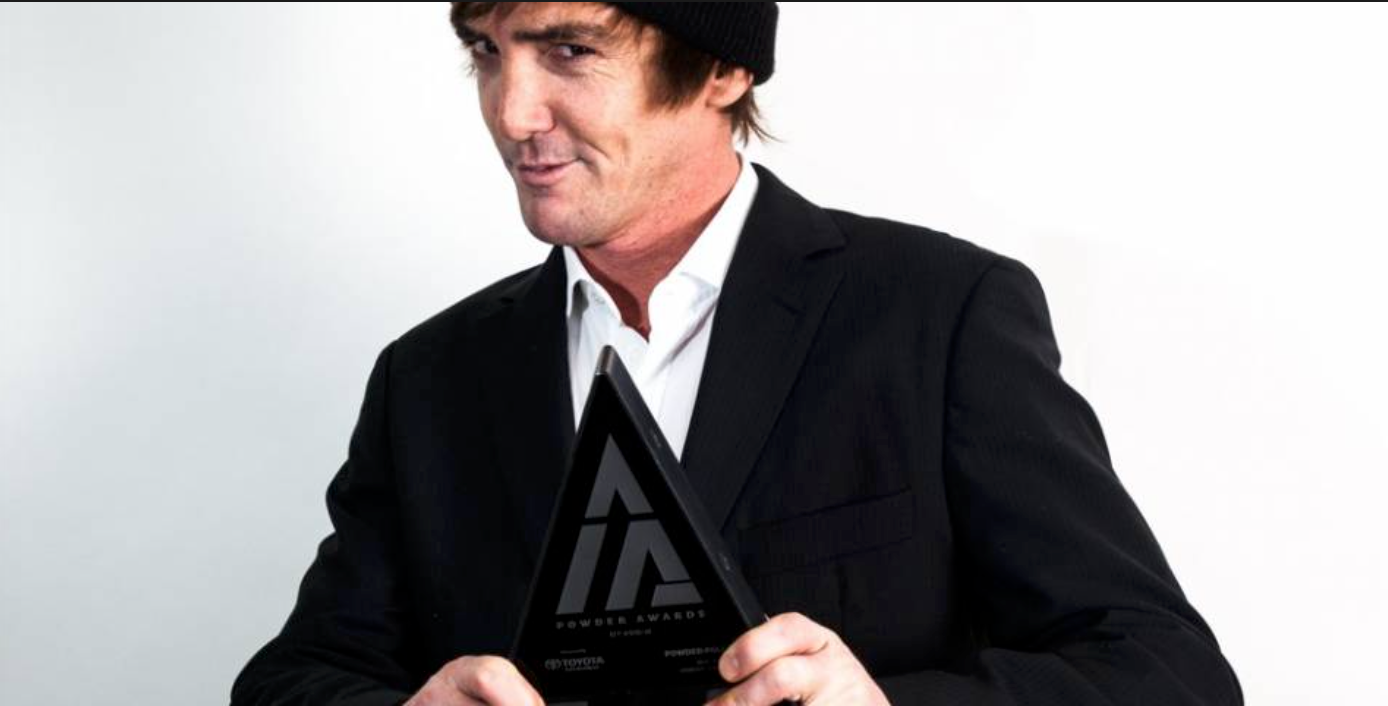 Candide continues to be very popular in the ski community, finishing in one of the top 3 places in the 2014, 2015 and 2016 editions of the Powder Magazine Readers Poll. Candide won the 17th Annual Men’s Powder Poll after his win at the inaugural Powder Poll in 2000.