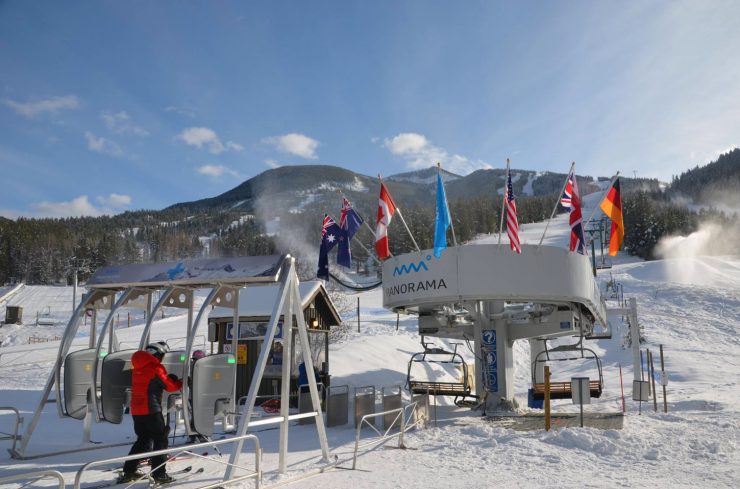 It’s the most wonderful time of the year; Halloween decorations have come down and snow is in the forecast. Resorts are getting ready to scan passes and spin lifts, with several already open thanks to serious snowmaking and a helping hand from Mother Nature.

Oct. 19 was a busy day across the Northern Hemisphere—Arapahoe Basin, Colo., Killington, Vt., Sunday River, Maine, and Fujiyama Snow Resort Yeti in Japan all dropped ropes on early season terrain. A-Basin started making snow back in September and boasts a depth of 18 inches. Killington has a 12” base and is robustly pumping snow on Superstar in preparation for its Thanksgiving weekend World Cup women’s slalom event. The weather has been kind to Sunday River—it opened with 2-3” of new snowfall and then reopened Oct. 26 with almost a foot of fresh. And Fujiyama was the first resort in Japan to open for the 20th year running after pumping 550 metric tons of man-made snow on the hill while it waits for the famous JaPow to fall.

The US Midwest got in on the October fun when Wild Mountain, Minn., opened its terrain park from 12pm-5pm on Oct. 21, but Wild has since closed until colder temps allow it to reopen. Ski Brule, Mich., anticipates a Nov. 9 opening.

Alberta resorts are also gearing up for winter. Mount Norquay is expected to open this weekend on Nov. 2, and Lake Louise, Marmot Basin and Banff Sunshine are all aiming for Nov. 9.

Cooler temps have lifts in the Pacific Northwest ready to start turning. 49 Degrees North, Wash., is scheduled to open for Friday – Tuesday service on Nov. 10 until mid-December when it will open full-time.

In Colorado, Loveland Ski Area has been going strong since it dropped ropes Oct. 20. Wolf Creek, the resort that opened first this year on Oct. 13, is aiming to reopen Nov. 3. And Vail properties Keystone, Colo., and Breckenridge, Colo., are both eyeing Nov. 9 openings.

In the east, Wildcat, N.H., and Mount Snow, Vt., both had historic opening weekends on Oct. 27. For both resorts, it was their earliest opening in their 60-plus year histories. Wildcat opened top to bottom with 2,100 vertical feet of skiing and about 10” of fresh, and Mount Snow claimed the most skiable terrain in the east. Both closed mid-week and are expected to reopen Nov. 3. Bretton Woods, N.H., is slated to open Nov. 10.

So many resorts have invested in snowmaking upgrades over the past few years—it seems operators are keen to put those capital improvements to good use this fall with early season starts. Many more resorts are slated to open mid- through late-November as weather systems allow. Stay tuned for future updates from SAM.