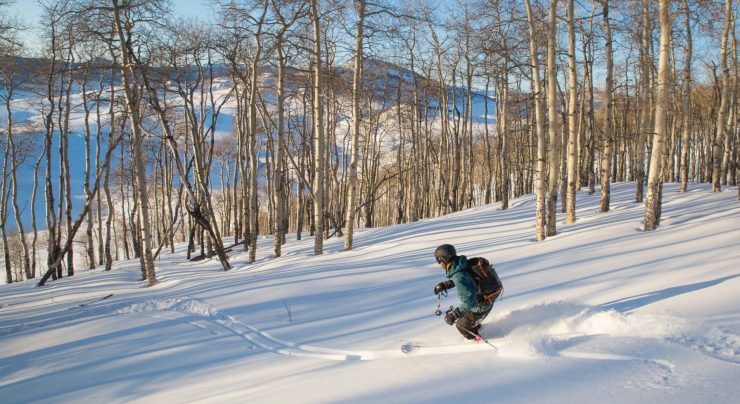 North America’s first human-powered ski area opens next month in Colorado near Kremmling and you’re invited to give it a Kickstart.

Erik Lambert and Jeff Woodward and their Bluebird Backcountry project are developing a lift-free backcountry ski area on 1,500 acres of private land flanking Whitley Peak, the prominent volcanic plug on the southern end of the Rabbit Ears range. The pair of entrepreneurs have spent 18 months hosting test events and searching the state for slopes to anchor their dream of building a ski area with all the trimmings of a traditional hill — ski patrollers, instructors, guides, a base hut, gear rentals, a mountain warming hut, trails and avalanche hazard reduction — minus the chairlift.

Lambert commented, “We’re just a couple of guys and a team of awesome volunteers who think the idea of a human-powered ski area is cool and will improve backcountry access, education, and community. We’ve been volunteering our time for three years to bring Bluebird Backcountry to life, designing the place we wish we had when we were making mistakes early in our backcountry lives. We are so excited that we’ve made it this far!”

Tickets are Limited! Kickstarter is your chance to reserve a spot before tickets go on sale on their website. They are only selling 100 season passes this year, and season pass holders will get early access to the mountain on February 15 & 16.

Even when there are no chairlifts and the land is totally unimproved, opening a new ski area is a massive project and REALLY HARD! We’re purchasing a substantial rental fleet for skiers and split-boarders who don’t yet own their own gear. We still need to cover the costs of temporary buildings and bathrooms, equipment, plowing, parking and other improvements. These things are obviously necessary in order to provide the experience we want to give guests at Bluebird Backcountry this year. We also hope to open other locations in future years… help us get a “kick start” this year so that we can thrive and expand the Bluebird Backcountry concept to your neck of the woods! 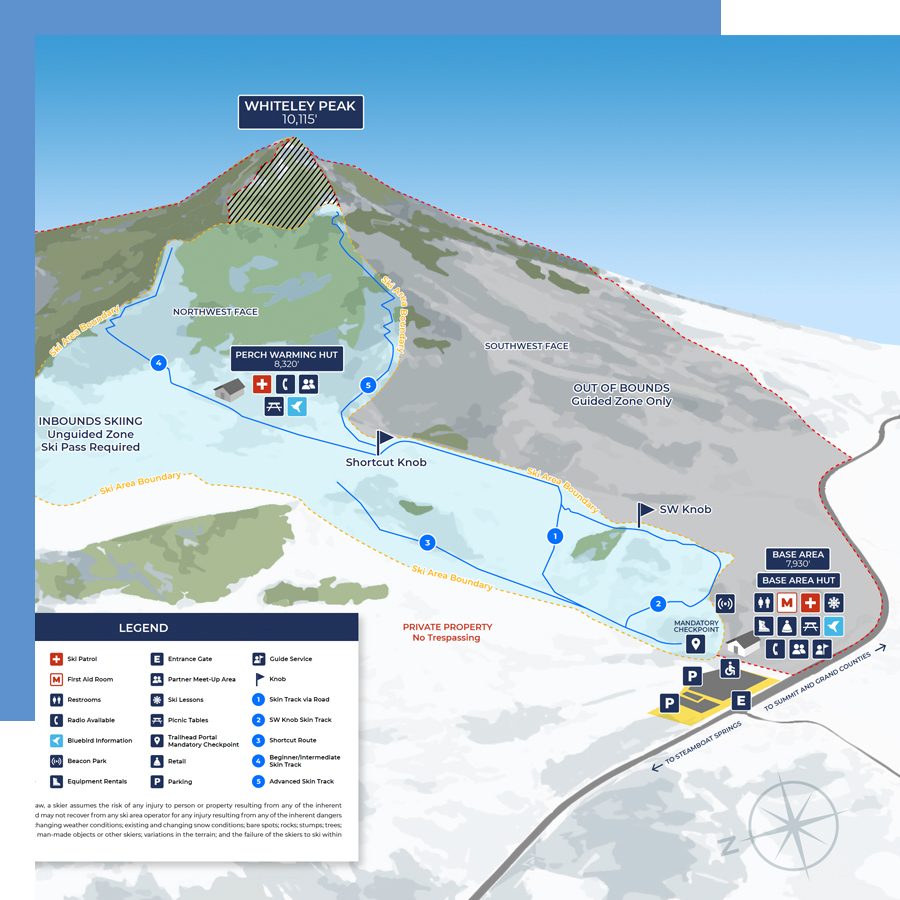 As uphill skiing and backcountry touring explode, “we are seeing a confluence of factors that make this the perfect time” for a human-powered ski area, Lambert said.

“People are ready to get away from the crowded resort experience. They are maybe a little bored with traditional resorts,” Lambert said. “Part of going outside in the winter is this special experience you get communing with nature and it’s hard to do that at a crowded resort. That’s a big part of what people are seeking in the backcountry: more solace. They are looking for the soul of skiing.”

But journeying into snowy avalanche terrain is fraught with risk. Travelers need specific skills to identify hazards in addition to specialized — and pricey — equipment to help them more safely navigate those risks.

“And it’s hard to get that experience without a mentor,” Lambert said. “People don’t know what they don’t know about the backcountry and we are ready to create a welcoming environment for them to come and say ‘I don’t know anything but I want to learn’ and do that in a place where they feel comfortable.”

Lambert and Woodward last year tested their plan, hosting 171 backcountry skiers at a planned backcountry ski operation near Mosquito Pass and at Winter Park ski area. Demand was huge as skiers hungry to hone backcountry skills flocked for $50 guided tours and instruction. One of the volunteers who helped that pair on those outings had a relative who owned a ranch north of Kremmling. They met and hammered out a plan to lease a portion of the property for skiing in February and March.

And here’s the plan. Bluebird Backcountry at Peak Ranch — about 20 miles north of Kremmling and 40 miles south of Steamboat Springs — will open for 15 days between Feb. 15 and March 15. Tickets will cost $50 and a two-hour backcountry lesson will cost another $50. They will have backcountry safety gear, skis and splitboards for rent at a base-area tent. No more than 300 skiers a day will be on the mountain, where 300 acres will be open for unguided skiing and 1,200 acres will be open for guided turns. A warming hut on the mountain — The Perch — will serve as a mid-mountain respite.

While the Bluebird Backcountry patrollers will not be using explosives to mitigate avalanche risks, they will be using other methods to reduce hazards, including simply closing terrain during escalated danger. The slopes won’t be groomed and runs won’t be cleared.

The private ranch — with its castle-like 10,115-foot Whiteley Peak — offers 2,200 vertical feet of open meadows, northwest-facing aspens and dense brush on a variety of steep to low-angle slopes.

With easy access off U.S. 40, a location near a town within a few hours of Denver, good snow and both easy and challenging terrain, the ranch checked a lot of boxes for Lambert and Woodward, who spent most of 2019 chasing down potential locations for their project. They have a temporary lease with the ranch owner to use the property, with the potential for a longer lease available if the February and March trial goes well.

But nothing at the ranch has ever been skied, at least regularly. There is no history of snow measurements to help them predict future snowpack or avalanche risk. Woodward and Lambert are working with Colorado Mountain College on snowpack surveys of the area.

“We have put a lot of time and thought into this and we have a very detailed operations plan that we have run by a number of industry leaders and that’s been really helpful,” Lambert said.

“Neither of us have ever operated a ski area. We know we are going to encounter challenges every day that we didn’t expect but we have an amazing team. The hardest part will be figuring out how to respond to things we didn’t anticipate and I think that’s true for a lot of start-ups.”

The folks in Kremmling are excited, said Tara Sharp, the director of the Kremmling Area Chamber of Commerce.

The town sees good traffic in the summer and fall with rafters, ATVers, hunters and anglers. In the winter, most of their visitors are snowmobilers. Backcountry skiing, she said, is “one of the key outdoor sports we are lacking here in Kremmling.”

“I think this will bring visitors who might otherwise be passing through and it could keep them here and that’s exciting from an economic development standpoint,” Sharp said. “Now Kremmling offers pretty much anything you want to do outdoors.”

Woodward and Lambert are launching their plan Monday on Kickstarter to help spread the news. They don’t necessarily need the crowd-sourced money to open, but they are offering first dibs on tickets

They are optimistic. They have gathered a list of more than 3,700 skiers interested in a backcountry-lite ski hill and they feel like their timing is right. Traffic at resorts is booming and a sustained surge in the sale of backcountry gear and avalanche-safety equipment makes it one of the fastest growing segments in the snowsports market.

“It’s a big step but we are feeling good,” Woodward said.

The industry is watching too. As more ski areas craft policies for the hordes of uphill skiers who climb up groomed slopes before lifts start turning and Aspen positions itself as a human-powered hub for uphill recreation, the success of a lift-free resort that caters only to skinning skiers could mark a cultural shift in skiing akin to the arrival of snowboards.

Nick Sargent, the head of the SnowSports Industries America trade group, thinks the opportunity to safely learn backcountry skiing in a controlled environment could reach millions.

“Bluebird Backcountry has a chance not only to revolutionize how people learn to backcountry ski but also to reshape the skiing industry as a whole,” he said in a statement.

Tell them you’re excited about the idea of a backcountry ski area by supporting their Kickstarter or volunteering.