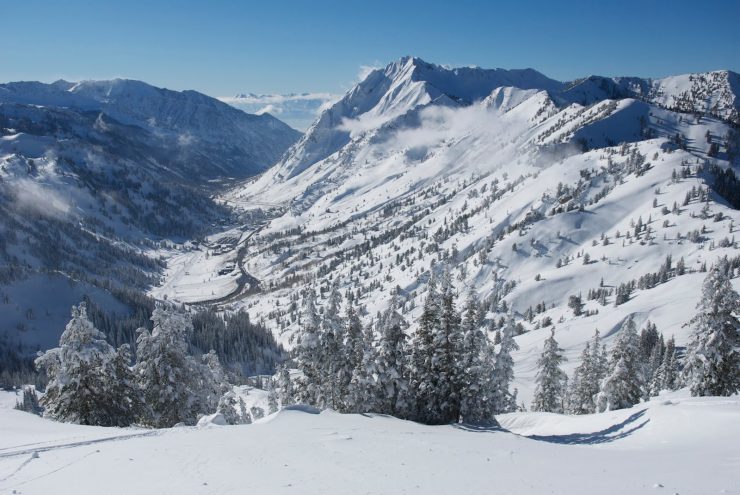 Three naturally occurring avalanches buried the road near the entrance to Snowbird, another near Tanners Flat and a third near White Pine. The avalanche by Snowbird left eight to 10 feet of snow for crews to clear.

The sheer destruction and debris piles on both sides of Little Cottonwood Canyon road can be seen in the following highways video:

Alta Ski Resort was closed for the second day in a row and the Town of Alta was ordered to stay indoors. Judging by the video below, it was a wise decision, as the avalanche cloud passed The Peruvian Lodge and engulfed empty parked cars. Nobody was injured and nothing was damaged by the cloud.

The Utah Avalanche Centre reported the 48 hour storm total from Wednesday evening through Friday in Little Cottonwood Canyon as being a whopping 30″-41″ of snow! They also stated that ski area control teams found generally stubborn avalanche conditions yesterday but were able to trigger – primarily with airblasts – soft and hard slab avalanches up to size two and size three. In the backcountry, cornice fall triggered two notable avalanches along the Park City ridgeline. At least one (Pointy Peak) failed at last weekend’s facet/crust interface.

Be safe out there and always check the avalanche conditions before heading into avalanche terrain.