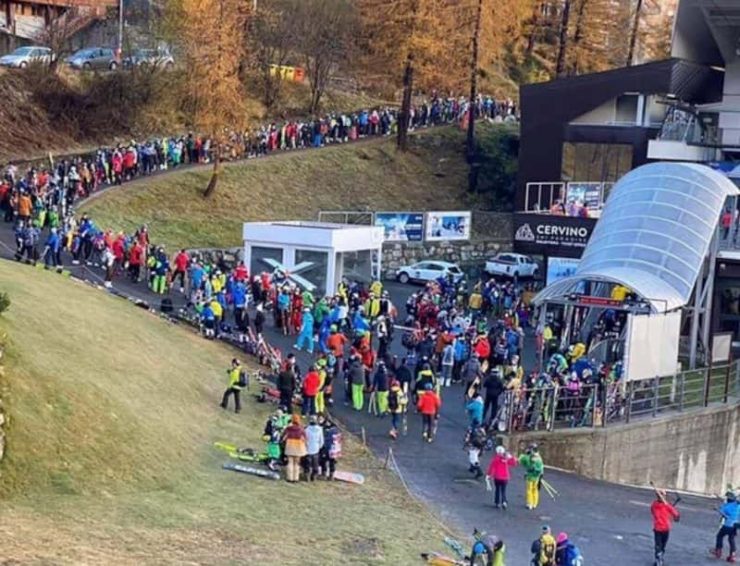 With COVID-19 cases rising quickly in Europe, winter resorts across the continent are facing new capacity restrictions and delayed openings. The new rules arrived just as early snow had allowed glacier resorts to spin lifts and with many other areas poised to begin operations.

On Sunday for what appears to be overcrowding, the government enforced closure of Cervinia ski area, Italy. It’s reported that the Italian government has shut all ski lifts for a month.

It’s not clear that the viral photos of crowded lift lines at Cervinia’s opening day were the reason for Italy’s decision to lock down winter resorts, they were a bad look at the very least. They were also a stark reminder that resort operations will be closely scrutinized by both the authorities and the public this winter.

Reports of new limits snowballed after images of long lines of skiers and riders who don’t appear to be socially distanced at opening day for Italy’s Cervinia resort on Saturday went viral. On Sunday, the Italian government issued an emergency decree to increase restrictions aimed at stemming virus spread across the country. That decree included an order that all ski areas must shut down until Nov. 24, according reports.

It isn’t clear if the scenes at Cervinia prompted the government to include ski areas in its newly-elevated restrictions. PlanetSki simply reported that the order said ski resorts needed to close to the general public “pending an examination and authorization on their procedures.”

Italian minister of sports Vincenzo Spadafora reportedly will allow the resorts to host race training and competitions.“Apart from national competitions, Italy’s ski facilities will remain closed. In November you will not go skiing in Italy,” he said.

Cervinia is one of four Italian ski areas that had opened for the winter ahead of the government’s announced restrictions. However, according to PlanetSki, it’s the only one that abided by the government’s order to close. It appears that Cervinia is planning to reopen today for competitive ski clubs, but not the general public.

The other three resorts have cited different reasons for staying open, such as being located in a semi-autonomous area of Italy and arguing that the benefits of skiing and riding outweigh the dangers of contracting the virus. All four Italian resorts reportedly have strict COVID safety measures in their operating plans.

In addition to Italy, other recent “mini-lockdowns” instituted in France and Germany for the month of November will delay ski area openings in both countries, according to Patrick Thorne of UK-based The Snow Hunter. Several ski areas in Austria are currently open, and others in Switzerland have planned openings this weekend, Thorne reported. Both countries are experiencing an uptick in COVID cases, but it’s unclear if elevated restrictions will be instituted, and if they are, what effect the restrictions will have on ski area operations.

Vail Resorts saw year-over-year business levels improve during January and February, with season-to-date visits down 8.2 percent through March 7 compared to the prior year.