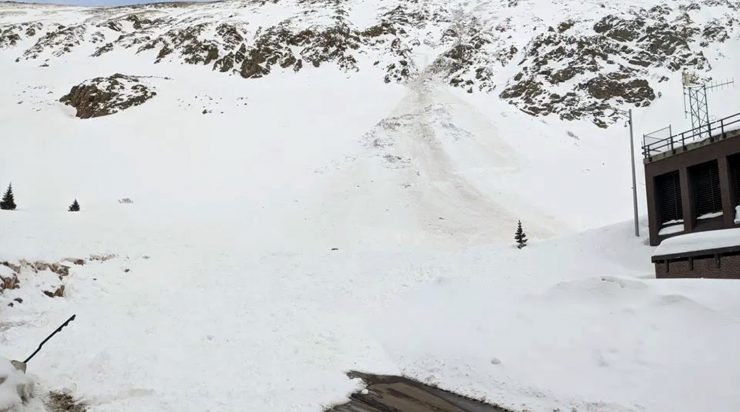 Two snowboarders have been cited with reckless endangerment after triggering an avalanche that hit the Loop Road above the west portal of the Eisenhower Tunnel. The Eisenhower Tunnel, officially the Eisenhower–Edwin C. Johnson Memorial Tunnel, is a dual-bore, four-lane vehicle tunnel, approximately 60 miles (97 km) west of Denver, Colorado.

On the afternoon of March 25, 2020, two men — identified as Tyler DeWitt of Silverthorne and Evan Hannibal of Vail — were backcountry snowboarding above the Eisenhower/Johnson Memorial Tunnels when they triggered a large avalanche that covered more than 400 feet of active roadway above the west portal of the tunnel.

The snowboarders made their way up the slope from a parking area on the west side of the tunnels and rode down in a line above the tunnels. The boarders triggered what initially was a small avalanche, but as the slide continued it shot widespread cracks across the slope and eventually eroded into the “very weak” basal facets that removed the entire snowpack, according to a report from the Colorado Avalanche Information Center. The avalanche danger was rated moderate at the time.

The slide damaged a O’Bellx remote avalanche control unit, essentially a fixed gas chamber on the slope that can remote detonate during avalanche mitigation efforts, and eventually buried the Loop Road in up to 20 feet of debris. The Loop Road is a service road primarily used by the Colorado Department of Transportation but was open to the public at the time of the avalanche.

The men called 911 to report the avalanche and met law enforcement on the Loop Road after they finished descending. DeWitt said they spoke with officials for a couple of hours and were initially allowed to leave without being cited.

No cars or individuals — including the snowboarders — were caught in the slide, though officials said the avalanche easily could have been deadly under different circumstances.

Of note, there was nothing legally preventing the snowboarders from accessing the area, and they were within their rights to ride the chute. But given the circumstances and subsequent danger, some officials felt the men acted in a negligent way and unnecessarily endangered everyone on the roadways below.

“They were both experienced backcountry users, and based upon that experience should have been able to contemplate the danger that arose from riding an avalanche chute directly above the tunnel, where automobile traffic goes directly underneath,” Fifth Judicial District Attorney Bruce Brown said. “They triggered an avalanche, and luckily no one was harmed. But the charge of reckless endangerment is that you do something recklessly and that you create a substantial risk of serious bodily injury to another person. In this case, it was the community in general driving on the roadway below.”

Both DeWitt and Hannibal were issued citations for reckless endangerment, class 3 misdemeanors, in early April.

But DeWitt said the citation was unwarranted and that he intends to fight the charge. He said he’d been watching the wall for a couple of weeks to track avalanche conditions, noting he’d only seen small “sluff” slides traveling short distances. He also felt that the presence of other skiers on nearby chutes, and avalanche control units on the slope pointed to lower potential for a large-scale avalanche.

“Those were the things that gave me confidence in riding that terrain,” DeWitt said. “Evan and I are out in the backcountry a lot during the winter. That’s our lives. We go out there every day, we assess avalanche conditions, and we play it by the book.”

DeWitt also said he felt the avalanche easily could have happened naturally without them.

“It’s (the Colorado Avalanche Information Center and CDOT’s) job to control the slope enough to make sure nothing would reach the road. And it turned out that they didn’t have it controlled. … In my opinion, seeing these other little slides happening, that very well could have been natural,” DeWitt said. “… I was thinking that they had been blasting it all year, and that at max, there could be a 20-foot, tiny wet slab. It didn’t even cross our minds (that an avalanche could reach the road).”

Greene said officials performed gas explosion mitigation efforts on the slope on March 20, five days before the avalanche, which triggered four small slides. He continued to say that mitigation efforts look considerably different in areas where the primary goal is protecting infrastructure rather than skiers, and he noted that while its certainly possible, it’s unlikely the avalanche would have occurred naturally.

“There’s a real difference between a mitigation program you’d see at a ski area and a mitigation program you’d do on some sort of infrastructure like a highway,” Greene said. “It has to do with the likelihood of events you’re trying to prevent. … From that perspective, where the primary threat we’re dealing with is natural avalanches released by weather events, that program was doing what it needed to do. …

“And I think you can look and say it’s pretty unlikely it would have happened without human involvement. We certainly didn’t see any evidence from the surrounding area or the surrounding days of avalanche activity happening naturally. … Can I say it wouldn’t have happened two minutes later if they hadn’t have been there? No. But there was nothing else like that in that area during that time period.”

DeWitt and Hannibal are scheduled to appear in Summit County Court on Aug. 5 for an arraignment.

“It’s a really important topic for us all to think about,” Greene said. “It’s not always as clear as black and white or good and bad. We all enjoy the public lands and the access we have to them. With that comes responsibility for our own safety and making sure we’re not putting other people at risk without consent.”