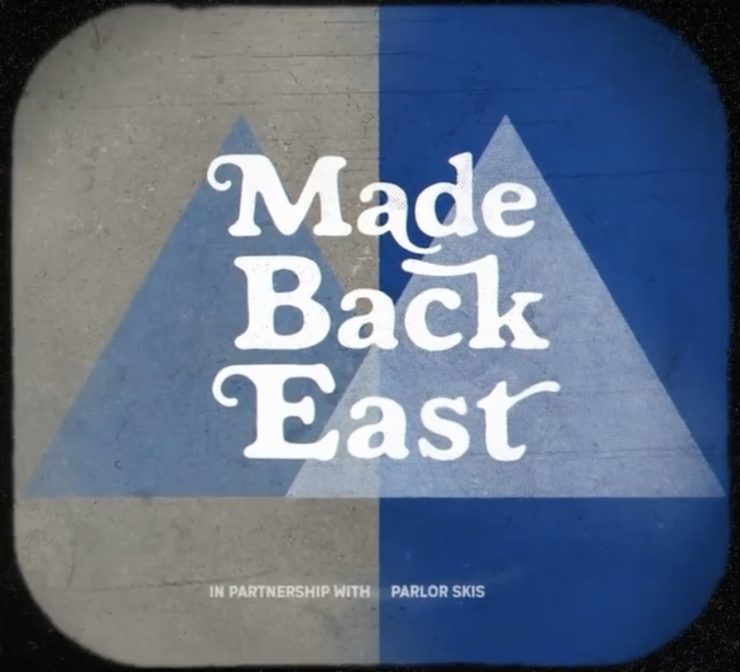 Made Back East is an enjoyable New England ski film. It sets out to show that backcountry skiing isn’t just for the west however, as an easterner, I already knew that. In the mid 80’s we were skiing Tuckermans NH, Mt Marcy NY, Mount Katahdin ME and the Chic Chocs in Quebec to name a few. They I found my way out west.

This the narrative from the creators:

“The ski community refers to our home as “back east”. Assuming that anybody who grew up skiing here would eventually find their way out West. But to us, that assumes too much. The mark of a true New England skier is a deep appreciation for the bad days just as much as the good ones. As they say “if you can ski the northeast, you can ski anywhere”.

In this film, we follow six diehard skiers on a trip into the woods seeking that perfect window where everything comes together. “Made Back East begins in Massachusetts, an unlikely location for any ski film to take place. It is here we meet two of our main characters, Mark and Tyler. The two of them run Parlor Skis, a custom ski shop located in East Boston.

The winters here in New England are unpredictable making it near impossible to plan a ski trip. But, the guys at Parlor see a window of opportunity to take a long-awaited trip to the “dacks” and they’re going to take it. After an arduous journey in the VW Vanagon to Lake Placid, the guys link up with the rest of the crew Tucker, Jeb, Jen, and Alex. The plan is to ski Angel Slides. A popular backcountry ski destination but Alex cautions the crew that at its steepest there is a risk of avalanche. The team then embarks on their journey.

Slogging their way to the base of the slide only to hear a “whumpfing” sound. A clear indication of avalanche risk. Reluctantly, the crew makes the decision to turn back, but in New England, we’ve learned to cope with disappointment. We just swallow our pride and say “we’ll get ‘em next time”. And the crew did just that. Awakening to a bluebird day at the Notch in Smugglers Notch, VT.

After a day of slashing fresh powder the crew, surrounding a bonfire that night, reflected on the “risk-reward” principal that makes the northeast, the northeast. In the end, what makes any trip great, are the people that you’re sharing it with.”

A Vagrants original, in partnership with Parlor Skis, New England’s custom ski & board builder, and presented by Life is Good, that explores a love affair with backcountry skiing.