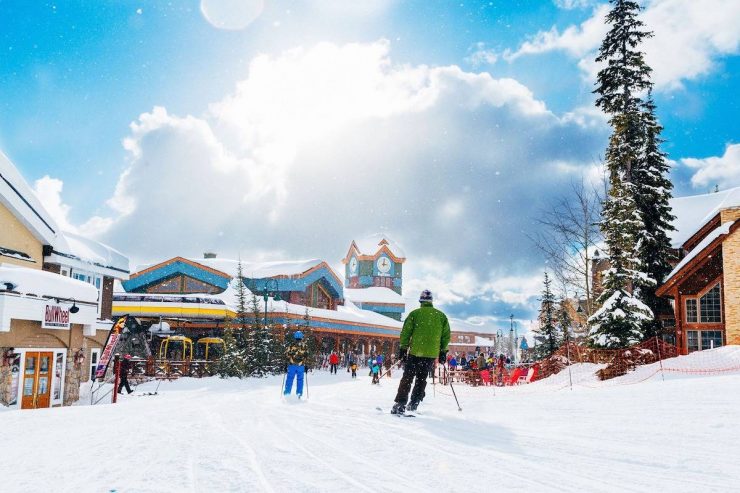 The resort has big plans, outlined in its new draft 2020 Master Plan, which was submitted to the province recently. The plan will guide development at the resort through 2089, with a goal to transform Big White “into a world-class, all-seasons destination resort.”

“When was the last time someone spent $10 million to show you a good time?” says Michael J. Ballingall, senior vice president of Big White Ski Resort. “With the tourism economy in British Columbia booming and the airport in Kelowna reporting record visitation, we’re betting on a buoyant economy to show a substantial return on this investment.”

Specifically, the document calls for a doubling of Big White’s operating area to nearly 7,000 hectares from the current 3,140. That space would include close to triple the current ski terrain and almost 200 more ski trails.

It would mean 22 new ski lifts! The largest investment announced is the $3.9 million construction of the new Powder Chair. The new lift will increase upload capacity by 1,900 passengers per hour allowing more skiers and snowboarders to enjoy the amazing terrain on Powder Chair.

In addition to the new Powder Chair, Big White Ski Resort is investing millions in other projects throughout the summer including $1.5 million to expand the skier tunnel on the Hummingbird run. Its current width of 25 feet will be widened to 60 feet accommodating increased skier and foot passenger traffic.

Big White Ski Resort continues expansion of mountain biking operations this summer with a $1.1 million investment in three to four new trails as well as a slopestyle course. At the same time, crews will be performing annual summer grooming and glading of the existing ski runs worth $200,000. In the winter these runs will be groomed with the help of a brand new $450,000 Pistenbully groomer.

Further investments include $1.1 million in annual lift and machinery maintenance, $500,000 in building maintenance, $750,000 in water and sewer upgrades and $150,000 for a new on mountain shuttle bus.

“I’m proud to be leading the third generation of our family owned business, which was established in the summer of 1985,” says Peter Plimmer, president and CEO of Big White Ski Resort Ltd. “My grandfather, Desmond Schumann, would be proud of what we’re doing here at the resort and I am confident all of these projects will be accomplished provided Mother Nature cooperates with an exceptional spring skiing season and melting our over eight metres of cumulative snowfall.”

Public engagement on the project is scheduled for Jan. 26 from 5 p.m. to 7 p.m. via Skype. Information on how to participate is available on the province’s website.

You can find Big White’s full 2020 Master Plan on gov.bc.ca.