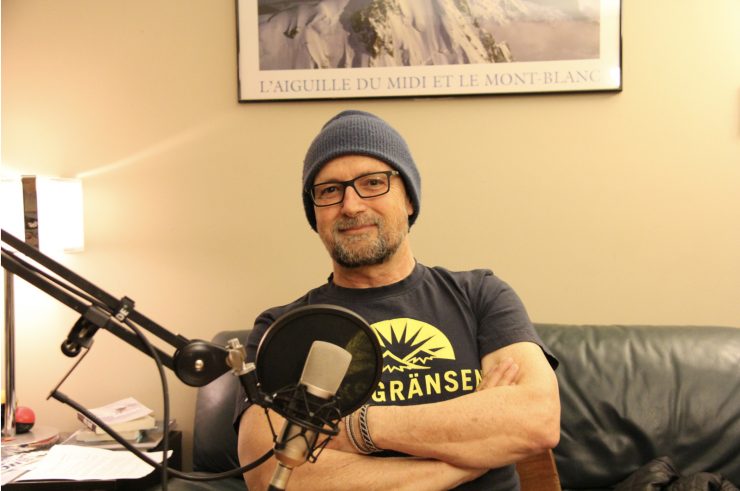 Leslie Anthony is a Toronto native and 30 year Whistler based author, editor, biologist and skier with an impressive list of accomplishments on and off the slopes.

I met Leslie in the late 80’s in Toronto when he and Henry Georgi were travelling the world documenting and publishing their ski experiences and have been following his adventures and reading his books ever since.

He recently published his top 50 Ski bucket list in his home town Pique Magazine. This is without question the most authentic and best top 50 ski bucket list ever composed, Warren Miller would be impressed!

Here is what Leslie wrote for his column:

“As a travel writer with a typically heavy winter schedule, this time of year usually finds me occupied by work assignments that can take me not just out of town, but to other countries and continents. I know I have been particularly lucky in this and am grateful for all the travel and the chance to experience ski cultures—and the unique people who populate them—around the world.

This year is different, however, as I haven’t left B.C. since March and haven’t set foot outside Whistler since September. But it’s got me thinking about what I might have been doing, and what I have done, and what the best of some of those things have been. I’ve written about many of these before in books, magazine articles, and even this column, but it seems like a good time to reflect on what a good Bucket List might be for other ski hounds.

I’m offering 50 places, things or experiences that have enriched my ski life and that I think might enrich yours. It’s only my opinion, of course, so you should take them with a grain of salt—but take them when you can:

1. Japan. JaPow and Japanuary have officially been a thing now for a decade. Don’t miss out on the most consistently deep and frequently refreshed snow on Earth.

2. Ex-ski-bum Swedes Niklas Möller and Eric Spongberg opened Ski Lodge Engelberg in Engelberg, Switzerland in 2008 to instant success and international notoriety as a freeride centre-of-the-universe. Staying there is a trip unto itself, but the skiing is out of this world.

3. Little Cottonwood Canyon, Utah, is home to historic ski areas Alta and Snowbird whose fluffy, lake-effect powder has been called “The Greatest Snow on Earth.” If you haven’t been already, you’re due for an in-depth analysis.

4. With its blend of traditional lifestyle, ancient village, and recent salvation from oblivion, there’s no other ski area remotely like the freeride heaven of La Grave, France.

6. Hotel Eiger in Mürren, Switzerland, reflects the musty parlour-pomp of Victorian travel and early ski-resort creation, but the James Bond vibe and views to the Eiger-Junfraujoch-Monch Massif remain unparalleled.

7. A pilgrimage to the alpine Mecca of Chamonix, France, is de rigeur, the most urgent reason being a chance to ski the planet’s biggest lift-served vertical (2,755 metres) run from the Aguille du Midi down the Valleé Blanche before climate change swallows the Mer de Glace Glacier.

8. A list of ski pilgrimages wouldn’t be complete without the Austrian Arlberg—the “cradle of modern skiing” where Matthias Zdarsky and Hannes Schneider turned a Norwegian winter utility into a bona fide sport.

9. In the far north, hard on the border with Norway, the Swedish resort of Riksgränsen is full of special stories. One of those is built around the stone remnants of an historic rail roundhouse: Small, cozy, Niehku Mountain Villa is the most exclusive heli/ski-touring lodge in the world—with the coolest wine cellar going.

10. Summer ski the Southern Hemisphere in Chile, Argentina, New Zealand, or Australia. All have legit mountains and ski-culture experiences.

11. If you have a need for speed, freshly groomed Ruthie’s Run on Aspen Mountain is probably the world’s finest combination of fall-line fun and well-preserved snow.

12. Whether you’re skiing it in thigh-deep powder or chest-high bumps, the Tram Line in Snowbird, Utah delivers the dubious bonus of a captive audience of 150 skiers zipping past you overhead.

13. Iceland. It’s so hot right now. Particularly the Troll Peninsula, where, whether you intend to ski-tour or heli-ski, you’ll experience comfort in rural isolation at Jökull Bergman’s Klængshóll Lodge near Dalvik.

14. As the longest run with the biggest drop in North America, Whistler’s Peak to Creek on a powder day is like an in-bounds heli-ski run. If you can handle the 5.5-kilometre, 1,530-vertical-metres non-stop you deserve your beer reward at Dusty’s in Creekside.

15. The Dolomiti Superski circuit weaves a huge figure-eight through several ski areas in Italy’s scenic Dolomites. It can be pulled off in a day if you don’t stop to ski a couloir along the way. Plan to finish at Vinoteca bar in Cortina.

16. The Hobacks at Jackson Hole, Wyo., offer an otherworldly powder experience in a place with generally otherworldly skiing. Get them before the sun does.

18. If you long to ski to the edge of a Norwegian fjord, the town of Stranda offers the best mix of resort skiing, spectacular fjord scenery, and plenty of off-piste exploration with Oscar Almgren’s Uteguiden.

20. For gawd’s sakes, ski the Swiss Alps. Do I really have to explain why?

21. Outside the funky ski town of Glacier, Wash., Mount Baker offers a throwback ski-area with the highest-ever recorded snowfall for a season: 29 metres in 1998–99.

22. Check into Hotel Taube in Schruns, Austria, a gateway to the historic Montafon ski region where Ernest Hemingway spent two memorable winters in the 1920s.

23. Relive your hippie roots in the B.C. Kootenay towns of Rossland, Nelson, and Fernie. Your head might not sprout dreadlocks, but you’ll see why these form a so-called Powder Triangle.

24. To see what a simple bootpack in the Alps can deliver, hike up to Maroiköpfle in Stuben, Austria. Descend to Langen and take a train back to St. Anton or taxi to Stuben. Mind blown.

25. Ski under the Les Suches cable car at La Thuile, Italy—steep and deep trees with spaces you can drive a truck through. Then lunch at the bottom in underground Pizzeria Dahu.

26. Ride Switzerland’s Glacier Express, a seven-hour luxury train journey in an all-glass car from Zermatt to St. Moritz. But make it a multi-day ride, stopping to ski along the way.

27. In Aspen, have a drink at historic Hotel Jerome, a heritage building and bar where celebrities like Jack Nicholson and rabble-rousers like Hunter S. Thompson kept a stool.

28. Have a wiener schnitzel at Weisses Rössl in Innsbruck. It’s both historic and excellent.

29. Have lunch at Maison Vieille on the hill in Courmayeur, Italy, where the party and mayhem never stops—and host Giacomo Calosi is at the centre of it.

30. Ski a couloir. It’s good for your soul, skiing, and geological knowledge. Most aren’t as steep as they look, but bring someone experienced anyway.

31. Ride the Aguille du Midi Tram in Chamonix, a heart-stopping experience even when the cable isn’t dragging on the snow below as British vacationers quietly sob beside you.

32. If you can deal with occasionally obnoxious sledhead tourism, Revelstoke, B.C., also has the best mix of resort, cat, heli and backcountry lodge skiing in Canada, and development of Revelstoke Mountain Resort has pulled the town up by its cultural bootstraps.

35. Hotel Portillo in the Chilean high Andes is a uniquely isolated cruise ship in the sky. Even if all you do is Instagram a photo of Inca Lake, the trip will be worth it.

36. Try night-skiing. Many in the Northern Hemisphere grew up with after-school skiing being all they knew. Scandinavia and Canada have hundreds of well-groomed night pistes, and Japan is amazing for night-skiing powder.

37. From Grindelwald, Switzerland, take the Jungfraubahn up through the interior of the Eiger to its summit, where you debark to an overlook of Europe’s largest glacier—the Aletsch.

38. A springtime ski-touring boat trip in Norway, Svalbard or Iceland is a once-in-a-ski-lifetime experience—even without the inevitable whales.

39. For a homegrown “wow” ride, the Peak 2 Peak Gondola between Whistler and Blackcomb mountains; the world’s longest, highest connecting lift spans 4.3 kilometres at 400 metres off the deck.

40. Take someone skiing who has never skied before. It might kill you, but could give them a whole new life.

42. Try cat-skiing—the “poor man’s heli”—at any of 25 operations in B.C., where the gold-standard has been set.

43. Explore ski-touring beyond the lifts. The gear has never been better, lighter or easier to use—but the silence and majesty of the backcountry is still the same.

44. Catch the mid-January Nozawa Fire Festival in Nozawa Onsen, Japan, the most insane winter event that this country of insane events serves up.

45. Do a hut-to-hut high traverse; the Chamonix-to-Zermatt Haute Route is the classic, but also crowded. The Urner Haute Route between Engelberg and Andermatt, or the Ötztal and other Austrian classics have better quality skiing.

46. Take an avalanche course; you can question the wisdom of my other choices, but not this one.

47. Ski with a certified mountain guide to gain knowledge about safety, mountain travel, the best snow and… let’s face it, everything you’ve been doing wrong all these years.

48. Ski under the midnight sun. Sweden, Norway, Svalbard, Finland, and Iceland all offer ski experiences above the Arctic Circle, and Stefan and Pia Palm’s Heliski Guides Sweden know the vårvinter ski-touring and flying scene in these places best.

49. Night skiing is great, but what about fully lit early morning skiing during winter’s dark months? Check out this fresh-groomed, top-drawer experience in Åre, Sweden.

50. European World Cup ski races are the best way to understand what skiing means to a national sensibility. The Hahnenkamm Downhill in Kitzbühel, Austria, reigns supreme as a test-piece for both racing and rowdiness.”

This is the pinnacle bucket list for Ski The World, we challenge you to live the dream and experience Leslie’s top 50!