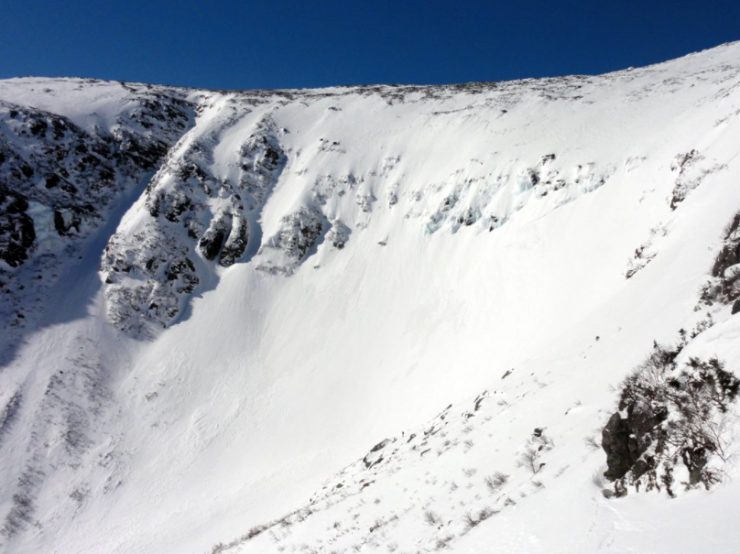 A skier survived after getting buried in an avalanche on Mount Washington in New Hampshire.

The skier was carried from near the top of Left Gully almost to the floor of Tuckerman Ravine, the Mount Washington Avalanche Center reported in a Facebook post.

Left Gully is too the left in the photo and is a documented avalanche chute. Here is the posted report:

On Friday. Jan 22, at 3:20 pm, a skier was caught and carried by an avalanche from near the top of Left Gully almost to the floor of the ravine. A ~six inch slab of new and wind deposited snow released from the upper most start zone from skier 2’s feet as skier 1 made his first turn. Skier 1 was quickly swept into and under the moving debris and lost skis and poles. When the flow stopped, he found himself buried face down, fortunately with his head very near the surface, but the rest of his body buried by two feet or more of debris. He was unable to move but could raise his head for a breath.
Skier 2 did not see his friend and skied away. Ultimately, he alerted others down by the rescue cache. Bystanders closer to the scene, began to dig out skier 1. Others arrived, including Hermit Lake and Harvard Cabin caretakers and later, snow rangers, to assist. (Thanks Pier and others!)

Shortly after shooting this video earlier in the day, I suggested to these two skiers, who did not have beacons, shovels or probes, that they ski the lower angled slope between Right Gully and LC or the lower section of Left, if they skied anything at all. They later told me that the excitement of new snow drove them to the top and into the upper start zone where the incident then unfolded.

There were no natural avalanches reported yesterday with a forecast that included possible human triggering of D1-2 wind slabs. This pair was among many poorly equipped or skiers traveling alone yesterday. All were very nice people with families ❤. Please, please, please, read the forecast carefully, take an avalanche class, travel safely, and carry the proper equipment. Life is too short already!

Travelling in avalanche terrain without proper education and equipment is asking for trouble.

Be smart, be safe and live to ski another day!