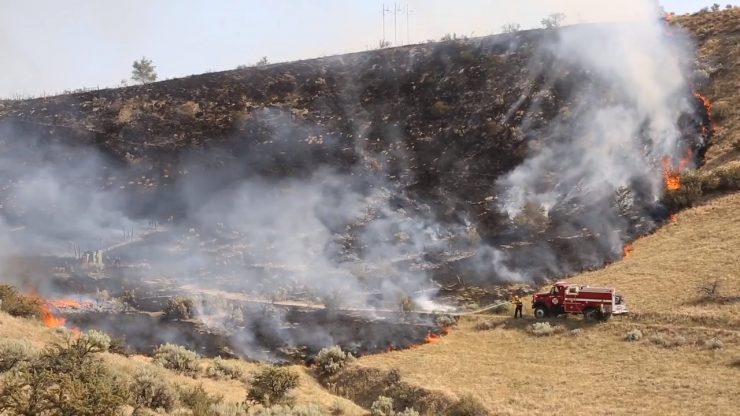 As a relentless series of heat waves broil the West, exacerbating an already significant drought, wildfire season is off to an ominous start. North American ski areas have been fortunate not to be in the direct path of any fires thus far, but indirect impacts from smoke and closures are still being felt and many operators are focused on mitigating their fire risk.

Wildfires are not a new phenomenon, the most recent fire outlook report from the National Interagency Fire Center (NIFC) determined that in many regions across the western U.S. there is “significant fire potential that is above average” this season. On July 20, the provincial government in British Columbia declared a state of emergency due to surging fires.

“We are not getting our cool summer nights on the mountain, with a typical strong, wet coastal breeze,” explained Logan Stewart, mountain manager at Timberline Lodge, Ore. Instead, the Pacific Northwest experienced a once-in-a-1,000-year heatwave in June, with Portland, Ore., seeing record breaking high temperatures. “What this all means is a very volatile fire season,” said Stewart.

Wildfire closures have tremendous impact on business sustainability, noted Rob Linde, GM of Arizona Snowbowl. In June, Snowbowl was forced to halt all summer operations for about two weeks after wildfires in nearby Coconino National Forest led the Forest Service to activate severe restrictions to reduce the risk of more wildfires starting. While the fires were not an immediate threat to the resort, the forest closure required Snowbowl to shut down.

During an Industrial Fire Precaution Level (IFPL) 3 restriction like the one Snowbowl experienced, “no one except key employees can access the ski area,” explained Linde. “Unfortunately, this means layoffs of seasonal employees, no revenue, and limited work out on the mountain during this time.”

When the Forest Service activates an IFPL 4, it results in a complete shutdown. “We had [an IFPL 4 shutdown] twice in the last three years, something I haven’t had to deal with in the last 20 years of my employment,” said Timberline’s Stewart.

Complete closures or highly restricted access will become regular elements of summer operations, Stewart predicts. “These conditions will have to be part of our operating plan moving forward,” he said. “Summer work is short around here, snow is on the ground until early July at the Lodge, and this year fire activity started in the region in June. That leaves a very short window to work effectively and safely in the forest.”

Showdown, Mont., is in the midst of its first shutdown in about 15 years, said marketing director Avery Patrick. The ski area has closed to the public and is now a staging site for firefighters working to contain the Divide Complex, the collective name for the Balsinger and Ellis fires burning near Showdown.

“We are now hosting a wildfire camp at our base area and lodge with 150 firefighters and administration on site,” explained Showdown GM Katie Boedecker. “It’s taken over our summer operations, and it’s constantly on our minds. It is our understanding that these fires will be with us until the snow flies.”

It’s not uncommon for ski areas to become staging areas for first responders when fires burn nearby, said Michael Reitzell, president of Ski California. The parking, resources, and even snowmaking infrastructure can often all be utilized in firefighting efforts. “Ski resorts generally serve as fire breaks because they are not densely forested and have parking or other non-fuel areas,” he said.

Bogus Basin, Idaho, purchased a new water truck this season and had to deploy it only four days after it arrived when the lift operations team spotted something burning on the hill. Trained staff responded with standard fire tools at first, only to find a pile of slash fully engulfed in 20- to 30-foot-tall flames. The ground crew was able to scratch a line above the blaze, but prevailing winds were pushing the fire downhill toward the tree line.

Per protocol, local agencies were notified. In the meantime, the Bogus Basin team kept up the fight. “We mobilized the water truck and used the first 3,000 gallons to scratch a line in the bottom of the fire,” said general manager Brad Wilson, who spent eight years in and out of college fighting fires. Then, 12,000 gallons later, the burgeoning blaze was out. All the local responders had to do when they arrived on site was mop things up, said Wilson.

It was a triumphant ending to a story that could have turned catastrophic quickly. “Had we not had that truck and had it not been ready to go, that fire would have gotten into the trees,” said Wilson. “It was an eye-opening experience.”

Firefighting preparedness. Effective fire response starts with a comprehensive plan—from staff to equipment to the agencies you call in the event of an incident—Wilson explained. Bogus Basin tests its response plan each year with a company-wide fire drill.

To mitigate the chances of a catastrophic fire and thus a catastrophic loss, Wilson and his team also did a walk through with the Forest Service to identify areas for wildfire safety improvement. As a result, Bogus Basin increased the defensible space around all its buildings, installed sprinklers around its building roof permitters, and installed sprinklers on its snowmaking hydrants.

At Bogus Basin, some other mitigation measures include mowing its grass earlier and conducting more extensive brush cutting to reduce fuel. Additionally, the ski area leaves its snowmaking system charged so it can be deployed to fight a fire right away if necessary.

After the slash fire, Wilson invested in a second water truck, a 4WD initial attack vehicle that can get anywhere on the mountain. It has a smaller tank, said Wilson, but greater mobility to tackle remote fires sparked by lightning strikes or abandoned campfires.

While lightning strike fires are frighteningly unpredictable, resorts can and should be aware of preventing human-sparked fires. Wilson noted that Bogus Basin’s fleet of 30 transport vehicles are all outfitted with fire extinguishers, water packs, and firefighting tools. “One of the common causes of forest fires is a vehicle fire. We are ready to respond if we come across a vehicle like that,” he said.

Continent-wide response. “A lot of it is about getting knowledge out there,” said Lex Rei Jones, GM of Hudson Bay Mountain Resort in British Columbia. Hudson Bay has been participating in the government run Wildfire Risk Reduction (WRR) program, which invests $20 million annually to fund wildfire risk mitigation projects focused on fuel reduction for ski areas operating on Crown land.

Communicating with guests and staff is another key preventative measure, said Jones. “In the off season, when we only have a handful of employees on the mountain, we have to communicate to ensure that recreators are being fire smart and prepared and that they adhere to things like campfire bans.”

Timberline’s Stewart echoes that idea. “Our concern in the ski area is keeping guests and passers through from starting a fire, so our teams are looking for people camping or having fires up and down the roads. The stakes are so high; we all are pretty spooked by anything that looks like smoke.”

Wildfires are not simply a problem for western ski areas either. “The threat is not confined to the West,” said Safehold’s Bruce. “The upper Midwest is really, really dry right now. We are seeing smoke in New England.”

“Are resorts outside of the West ready to react to a fire in a dry climate that instigates from, say, a mechanical spark?” asked Bruce.