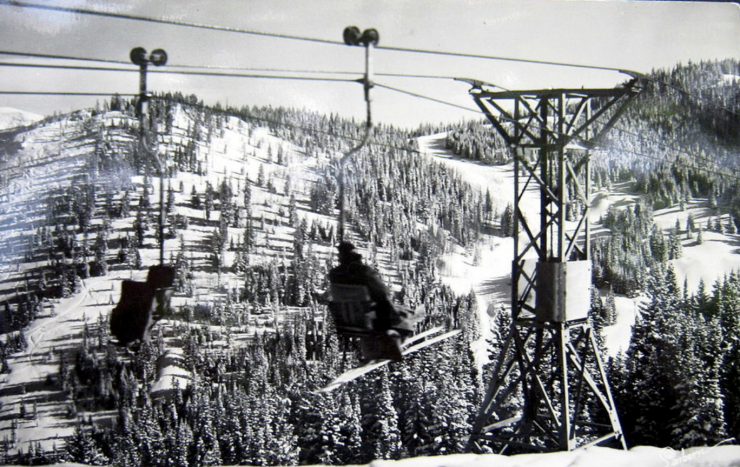 Even before the good old days got underway Ward Baker and I struggled over 11,000 foot high Loveland Pass in a 1937 Buick convertible Phaeton towing a then revolutionary tear drop trailer. Fortunately we had a gallon jug of fresh water we could pour into the steaming radiator and gave the engine a rest before we skidded down the western side of the pass headed for Aspen.

In those days there wasn’t a single ski resort between Loveland Pass and Aspen. No Vail, Keystone, Breckenridge, Copper or Beaver Creek. The dam that created a much larger Lake Dillon had not been built yet. With the smell of burning brake lining we finally got down to the valley and then began the long climb over Vail Pass. We were in no hurry so as we got down to the bottom of that pass we stopped and made a couple of peanut butter and jam sandwiches while we watched the sheep for awhile before moving on to Glenwood Springs.

No one knew that fifteen years later Vail would be created, a ski resort with a support community population estimated at 35,000 people which is about the same as Bozeman, Montana, is today. In 1947 the town of Avon was barely a wide spot in the road.

We continued west on a narrow, two lane winding road along the Colorado River to Glenwood Springs and then took a left turn along the railroad tracks that led to Aspen, Colorado. It was Aspen’s first winter as a ski resort instead of a mining town.

It had been an eight hour drive for us from Loveland Pass as we bumped down into the many potholes in the dirt streets of Aspen. We parked near the old Number One chairlift. It was advertised as the longest chairlift in the world. And it was at the time.

Freidle Pfeiffer who had moved there from Sun Valley to run the ski school was wrapping up his day and we invited him for a cup of coffee in the Jerome Hotel. This was one of less than half a dozen places to buy coffee in town.

Were Ward and I pioneers to go there so soon? I don’t think so. I was just someone who had spent four critical years of my life in the Navy and we had saved enough money to go in search of our freedom. We could afford six months of skiing as long as we didn’t have to buy lift tickets and lived in our eight foot long trailer. And we found a lot of different ways not to pay for lifts. In 1947, the most expensive lift tickets where at Sun Valley and Aspen and they were four dollars a day and worth every penny of it. However minimum wages were twenty five cents an hour, so you do the math!

Aspen had been a deserted town ever since the silver boom fizzled in the 1800’s. Camp Hale, where the Tenth Mountain troops trained was a cold ride away in an army truck during the war and soldiers would come to Aspen on their time off and ride in the old boat tow.

We had to hide our car and trailer down a dead end alley and met Freidle in the Jerome Bar for a coffee and some tea for me.

The highlight of the conversation was when he said, “You guys should buy a couple of these old houses while you are here. You can make them livable and work on construction during the summer and maybe on the mountain next winter. Last year I bought ten of them for one hundred dollars. That’s ten dollars each to get them back on the tax rolls.”

If you would like to buy one of those remodeled, “cute Victorian houses” today they would cost between three and four million dollars and that’s without a garage.

Unfortunately, Ward and I were water rats and wanted nothing but to spend the summer riding hundred pound surfboards without wetsuits. It would be almost a decade before the wetsuit and light surfboard really revolutionized surfing. I would compare those two items with the invention of the chairlift that revolutionized skiing. Make it easier and more comfortable and it will grow as long as it offers freedom to the participant.

The day after our cup of tea with the ski school director Freidle we climbed up the lower lift to Tartlet Park and skied down. The snow was OK the terrain fantastic but after riding the three chairlifts at Sun Valley all winter it was not worth climbing the second time and we were getting very low on money and were still almost a thousand miles from our homes and surfboards.

We straightened up the stuff in the trailer and headed west with a stop at Alta, Yosemite and a week of skiing at Mammoth during the first annual ski instructors certification tests in early May. The unpaved streets and ten dollar Aspen houses are still burnt into my brain as I sit here on a small island in the Pacific Northwest working on the biography of a life spent sort of lurching from one near disaster to the next and stopping often enough to produce hundreds of movies. What a ride!