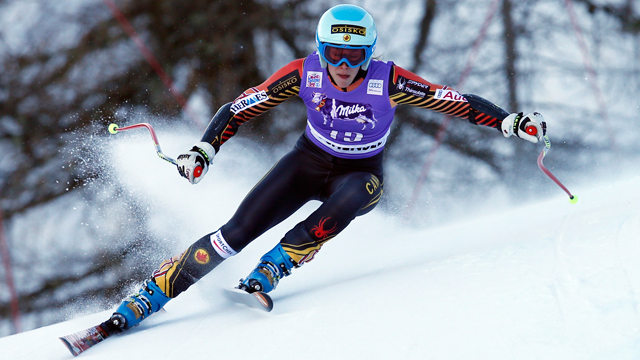 Alpine Canada is excited to introduce the athletes that will combine electrifying speeds with technical skill and power in a busy World Cup season with the Olympic Games on the horizon.

“We’re extremely excited for all the athletes qualified to represent Alpine Canada this year and for the Games coming up in February,” says Phil McNichol. “It’s always a hallmark experience for our sport, our team and our country to highlight ski racing.”

Leading the women’s team with 245 World Cup Starts under her belt, Marie-Michèle Gagnon aims to be a podium contender and qualify for her third Olympics after sitting out in 2018 due to injury. Last season saw her with a third-place finish in Garmisch-Partenkirchen, Germany, on one of the most demanding courses of the World Cup tour and she will carry the momentum for a women’s team that has seen consistent success in the women’s slalom. Cassidy Gray made her World Cup debut last year in what will go down as one of the best starts to an alpine career for a Canadian in recent memory. She finished 26th in just her second career start and followed up with a 23rd place finish a few weeks later at the World Championships in Cortina. Britt Richardson, the team’s newest member will make her World Cup debut in the famed season opener on the Rettenbach Glacier high above Sölden, Austria this weekend.

On the men’s side, with breakthrough seasons on the World Cup circuit Brodie Seger and Jack Crawford will lead a strong alpine team who will use the experience gained last season to continue to turn heads on the international tour. With an impressive comeback mid-season, Brodie skied to fourth place in the Super G in Cortina d’Ampezzo, Italy at the 2021 World Championships, just 0.04 seconds off the podium. Jack Crawford also finished a close fourth in the alpine combined at the World Championships, in a demanding discipline that requires athletes be both speed and technical experts. These results show the depth of this men’s team, who have their sights set on success. Liam Wallace has also requalified after initially opting to pursue his education at the University of Alaska after making the team in 2019-2020. It was an extremely difficult proposition based on the pandemic, access to racing, and travel challenges, and he stepped up in an unprecedented manner to qualify this season.

“We’ve had a very productive training this summer,” says McNichol. “We’ve been challenged with COVID and had to change our plans, spent more time in Europe, but have also been very lucky with the snow and training environments we had. Our athletes are fully prepped and ready for this season.”

As athletes and Canadians alike look ahead to the 2022 Olympic and Paralympic Games, this talented and dedicated group of individuals will strive for excellence this season, making Canadians proud while performing on the world’s biggest stages.

Follow the #CANskiteam’s journeys as they work to inspire and unite a nation through sport.

Congratulations to the athletes and go team go!