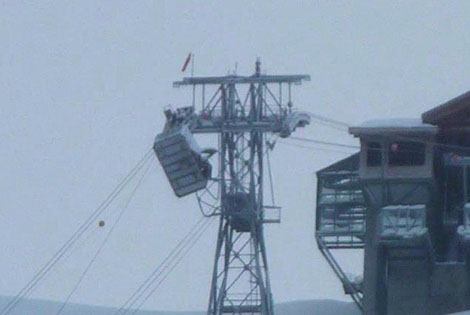 On New Year’s Eve, the Alyeska, Alaska, tram hit one of its towers in high winds and resort spokesman Jason Lott told reporters,”December 31, 2012 (at) approximately 7:20pm Alyeska Ski Resort saw wind gusts of over 45 miles per hour that caused the tram to hit the tower.”

Well, yes, it did hit the tower. What Lott failed to mention was the the tram was actually impaled on the tower, torn open, and left dangling precariously far above the ground. Or that a 15-year-old passenger was knocked unconscious and needed eight staples to close a wound in her head. It took five hours to evacuate the tram, and in the aftermath Alyeska has come off as tightlipped and not particularly forthcoming. Its first press release blamed the accident on wind gusts, plural, and later the official line was to blame it on a “rogue gust” of 45 mph. Winds in the stretch of AK often exceed 45 mph, so that’s like calling a 12-inch storm a “rogue dump,” and the tram isn’t supposed to be operated when winds are above 30 mph. How it will all be sorted out isn’t clear — there’s no official protocol for investigating tram accidents, and the government might not even get involved in any post-mortem.