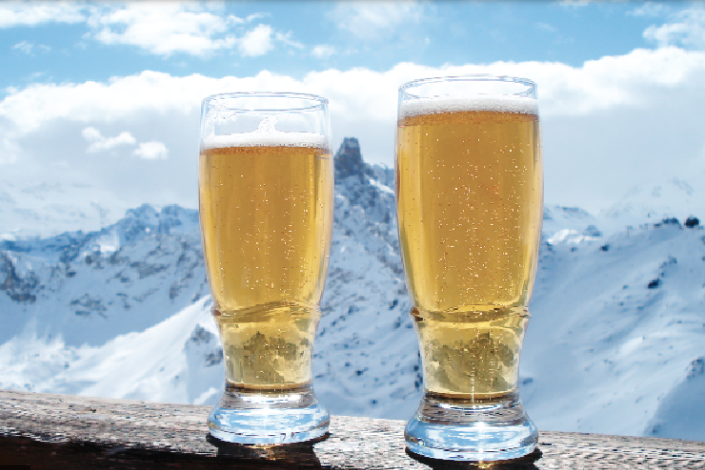 New Mexico Governor Susana Martinez signed a bill yesterday which will allow ski areas serve alcohol anywhere! The consumption of alcoholic beverages will be allowed in controlled access areas on the grounds of ski areas similar to golf resorts. The bill takes effect July 1. Currently, ski areas can have liquor licenses that allow alcohol to be served only in lodges or other buildings.

Ski Apache director of operations Justin Rowland was the initial driving force behind the idea. He was spurred into action after the area faced challenges getting temporary permits to serve alcohol at special events held at the resort. And as a golfer, he wondered why he was allowed to buy and consume alcohol anywhere on a New Mexico golf course, but not at a ski area.

“I went to Ski New Mexico to see if I could get all of the ski areas together on this,” said Rowland. “So George Brooks [Ski New Mexico executive director] got a couple of senators to sponsor the bill, and we put it through the session this winter.”

The bill will give ski areas in the state the flexibility to serve alcohol at special outdoor events such as concerts, weddings, and festivals—not to mention kick up the après ski scene a notch or two—without having to go through a lengthy process of applying for temporary permits. Next winter at Ski Apache, guests will be able to enjoy a drink on the patio located outside the resort’s bar in the base area. Another benefit, said Rowland, is the resort will have the ability to employ more people.

Supporters of the bill said allowing alcohol to be served on ski area grounds would be useful for off-season events such as outdoor weddings. Critics in the Legislature worried that making alcohol more available near ski slopes would be dangerous.

Many states, like Vermont, still require resorts to apply for temporary permits to serve alcohol outdoors. The permit only covers a specific area during certain hours requested by the resort, and the application must be submitted well in advance. The area needs to be surrounded by fencing with limited ingress and egress to control alcohol coming in and out of the permitted venue. New Mexico ski resorts will no longer have this burden, and can now capitalize on the opportunity to host revenue-generating events where alcohol is served, throughout the year.