Random Notes From Another Ski Season 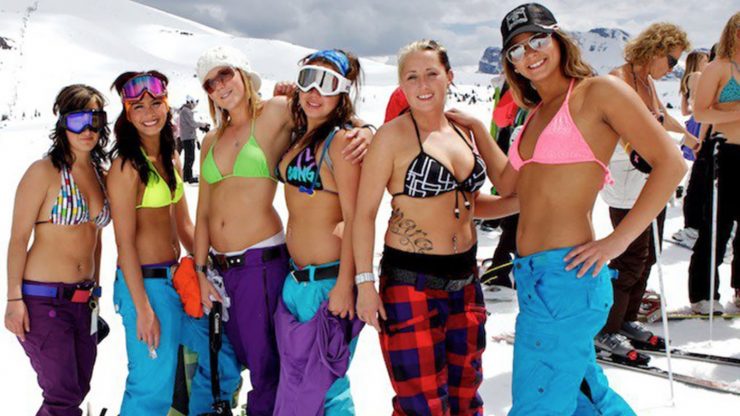 Easter Sunday, the traditional weekend when many ski resorts close, happened early this year. In case you didn’t know why, Easter is the first Sunday after the first full moon after the vernal equinox, which is March 21st. The early full moon can shorten the end of the ski season by as much as 27 days.

This was a ski season that was notable for its almost total lack of snow in the Northwest and Colorado. There were six weeks with no snowfall at all and then two weeks at the end of the season when it snowed three or four inches every night. This late snow put a great end to our ski season here in Montana. After another powder day today, I can hardly wait for next season.

We moved into our new Montana home this winter and it was a new experience for me to just walk outside our front door, climb into our skis and ride down to get on the lift. Are my wife and I lucky? You bet and because we like to share, we had friends stay with us almost every night this winter. During one stretch, we had 10 guests for six nights in a row. For a while, it was as though we were running a bed and breakfast, which included lunch, dinner and skiing, too. Fortunately, Laurie designed the downstairs of our home so that the guests could sleep as late as they wanted or get up early, fix their own breakfast, and walk out the back door and climb into their skis and get first tracks.

The downside of this winter was that I got hammered with a combination of 11 different mutant viruses at the same time and spent two-thirds of the winter trying to get rid of them. In other words, I was forced to stay in bed most of the winter.

Now that we are in the process of closing up our house until next winter, I have finally felt like skiing all day and for the last three days I did. Perhaps the blue sky, cold air and nine inches of new powder snow had something to do with my recovery.

There were record crowds here at The Yellowstone Club most of the winter and as many as 253 lunches were served on the mountain on one day. It’s a unique place, though, and even with the “crowds”, the five quads and four double chairlifts still gave us untracked powder snow for three or four days in a row.

What about the drought of the Northwest? For weeks, every resort in Washington and Oregon was shut down because of lack of snow. Several winters ago, Mt. Baker received 99 feet of snow. This winter, they still had green grass all the way to the top of their ski lifts in February.

If the Russians were still our enemy, everyone would be blaming them for this winter’s lack of white stuff. However, no one I know has been able to come up with a valid reason for the almost complete lack of snow. What do you think caused it? Any guesses?

Tomorrow morning we pack up our car and trailer with computers, leftover food, two dogs, clothes and whatever float is left on our credit cards to head back to our island home in the Northwest. It’s already time to paint the bottom of our boat and get the supplies together for our journey to Alaska this summer.

Soon enough, I will also have to fire up the old Briggs and Stratton to mow Laurie’s 90 square feet of lawn in the middle of one of the prettiest gardens on the island. Unfortunately, with our dogs in Montana this winter, the local mink got into the chicken coop and all 42 chickens are now history. They all wound up in the ocean as food for the local crabs and so the cycle of life continues on our island as it has for untold thousands of years.

We spent the winter making new friends and quite often, after a good powder snow run with people less than half my age, I said to them, “I hope when you’re my age you’re still having as much fun as I am.” This is a good age for most people to shoot at: 80 years and counting and I’ve skied during 67 winters. If ski companies had not spent so much of their money on research and development to make their skis so easy to turn and I still had to ski on seven-foot-three-inch, stiff wooden skis through bumps all day, I would have given up skiing many years ago.

When you make your last turns on your mountain this spring and take that one final walk through a muddy parking lot and put all of your gear in the back of your low-M.P.G., high-cost SUV, drop a note or an email to whatever company or resort gave you the freedom you had this winter and tell them thanks. Write that note even though you might feel they have charged you too much to ride their lifts and they have made a fortune. You are wrong! What if wherever you work could only sell whatever you manufacture for 100 days a year and only then if you got enough supplies, in this case snow?

When you are surfing in Baja or playing golf somewhere this summer, think about all of those millions of dollars in ski lifts that are hanging limply in the air, getting rusty from disuse. As I wait for the time next winter when I can once again board the lift, I will keep my computer busy recording the near disasters of our summer escapades. Stay tuned.