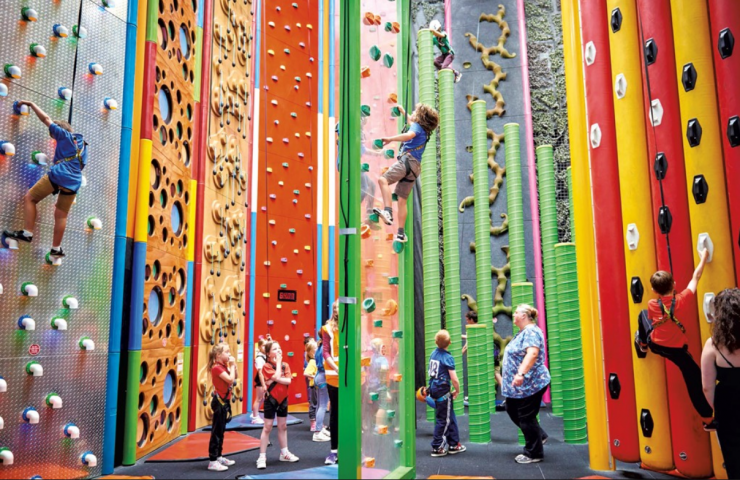 The official opening of Jay Peak’s Clips & Reels, a $5 million indoor movie theater, climbing wall and arcade center, marks the end of nearly a decade of major development at the resort—and the beginning of the process to sell the property, along with sister resort Burke Mountain.

Since going into receivership in April of 2016 after its former owner was accused of defrauding millions of dollars in a Ponzi-like scam, court-appointed receiver Michael Goldberg has made it clear he intends to make sure the properties maintain value when they eventually hit the market.

The 800-plus EB-5 investors who were defrauded in a massive Northeast Kingdom redevelopment scheme will likely get most of their money back with the sale of Jay Peak as well as the nearby Burke Mountain ski area and other properties. 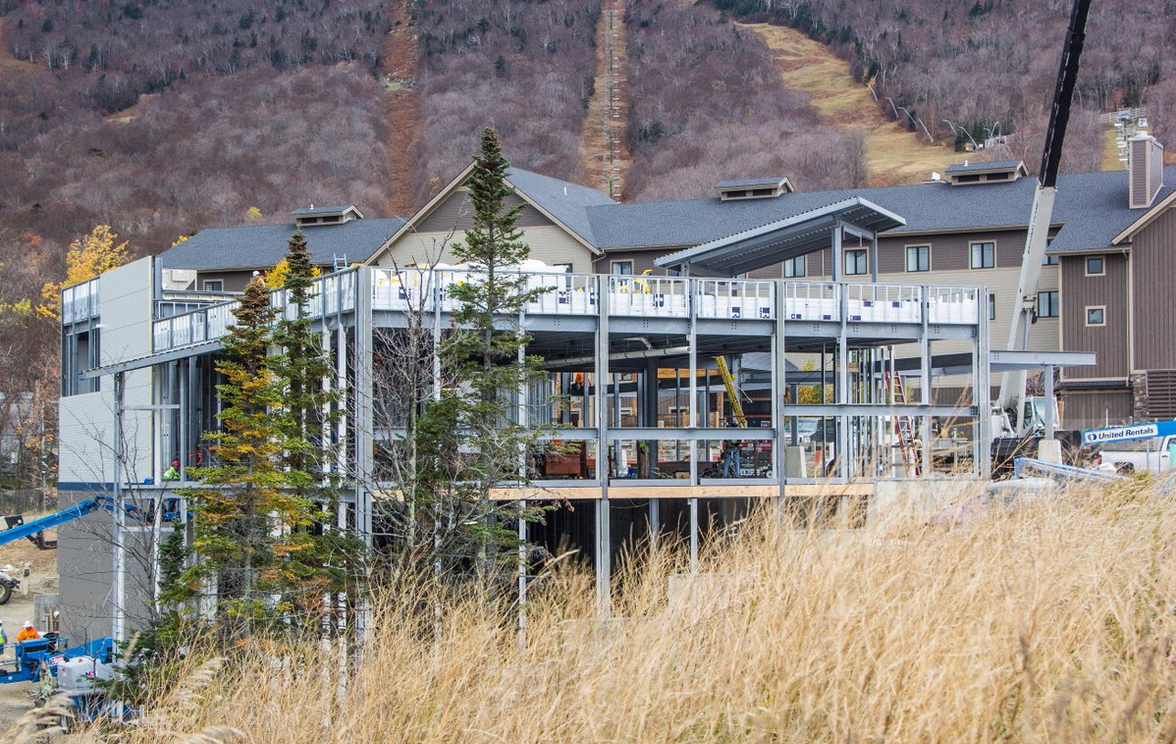 Gov. Phil Scott was at Jay Peak on Wednesday to mark the official opening of Clips & Reels Recreation Center, pictured above.

“It’s always nice to be back at Jay Peak, especially for some good news,” the governor told a crowd gathered in the Clips & Reels facility Wednesday afternoon.

“Jay Peak has come a long way,” Scott said. “It was just a couple of years ago we were fighting off a huge challenge here.”

The governor talked about how the area had been shaken at that time by the state and federal fraud lawsuits leveled against the resort’s developers. “But Jay Peak survived and continued to operate,” he said.

“The completion of these projects is a huge step forward for this community as it continues to recover,” Scott said. 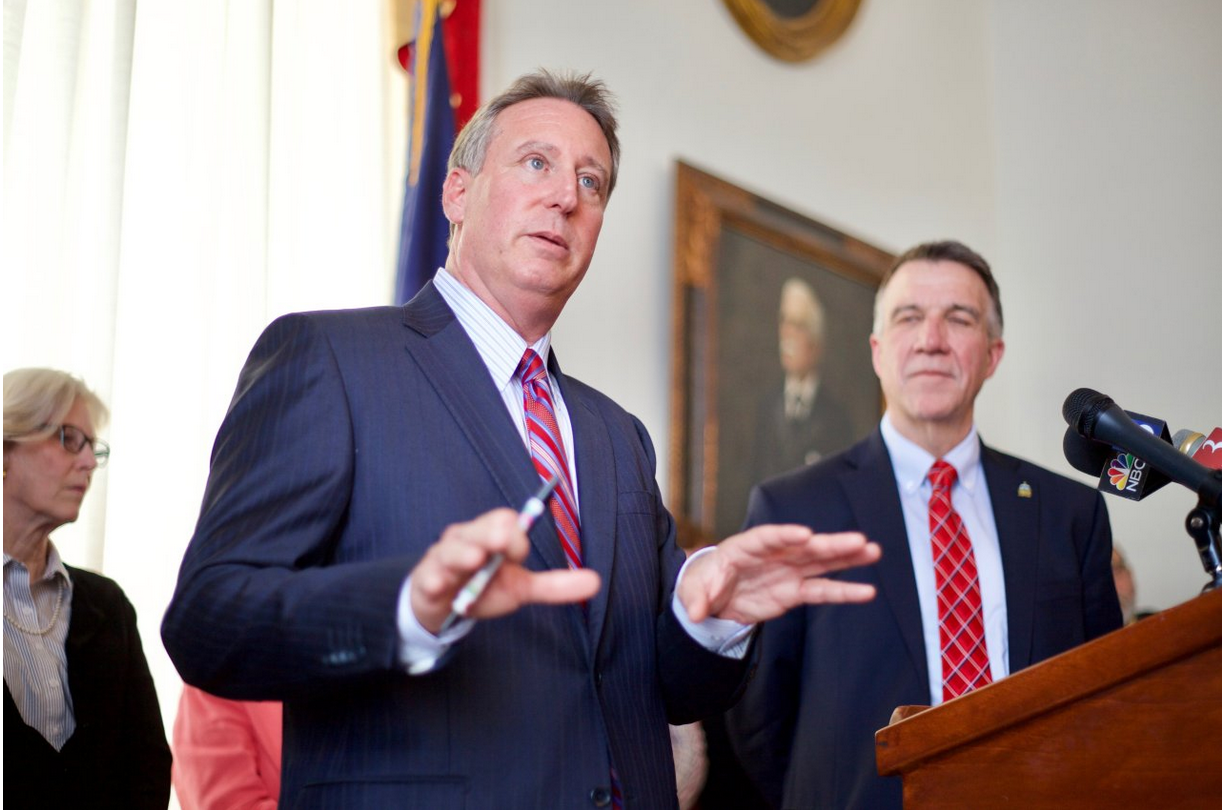 Goldberg (above) says the recent Securities and Exchange Commission settlement with the two men who perpetrated the Ponzi-like fraud, Miami businessman Ariel Quiros and former Jay Peak CEO Bill Stenger, has cleared the way for the sale of both properties.

In the settlement with the SEC, Quiros agreed to surrender properties he had totaling more than $81 million, including his ownership stake in both Jay Peak and Burke Mountain. Also as part of the settlement, Stenger agreed to pay a $75,000 penalty.

Goldberg plans to market the properties together as early as May, and he expects to sell the two resorts before the next ski season. The settlement, he says, clears the titles for the hotel at Burke Mountain, and the hotel complexes, condos, water park and other amenities at Jay Peak Resort. In addition, the investors now own Jay Peak and Burke mountains and the ski operations.

This greatly benefits the foreign investors, Goldberg said, because the mountains were never part of their original investments in the EB-5 program. Ultimately, it means the investors could recoup millions of dollars more than originally anticipated from a sale, depending on how much the properties sell for.

“I will tell you, based on the contracts they were not entitled to the mountains,” Goldberg said. “These people signed documents that gave them an interest in partnerships, now they have full ownership of the entire resort.”

“These are assets that were not owned by the investors,” he said. “In the docs [the limited partnership agreements] they were never supposed to own them, and now they do own them and they will pick up the sale.”

Since Goldberg became the receiver in April 2016, he has made a concerted effort to restore fiscal stability to the two mountains. He has kept the resorts operating through the receivership period and has recovered enough money from lawsuits against Citibank, Raymond James Financial and other sources to pay off debts and make repairs.

The half-finished condo complex at Stateside was completed, a faulty tram was repaired to the tune of $5.1 million, vendors have been repaid an outstanding $5 million and another $5 million debt to contractors has been settled.

In addition, Goldberg has made investments in snowmaking, landscaping, soccer and lacrosse fields and a new theater at Jay Peak. He installed a new lift and snowmaking equipment at Burke.

“We have turned around this 180 degrees,” he said.

Goldberg said the management teams at Jay Peak and Burke have made good decisions, workers have been dedicated to restoring business at the two resorts, legal decisions have been fortuitous and “we are rowing in the same direction with the SEC.”

The resale value of the resorts is a big unknown at this point, but Goldberg anticipates a vigorous sales process with private equity buyers and bids from resort, timeshare and hotel companies.

Goldberg expects to see “a well attended sales process with a lot of rich people and entities — it will go for the highest possible price.”

Steve Wright, the resort’s general manager, spoke to the crowd Wednesday at the Clips & Reels center at Jay Peak about the growth he has seen at the resort over the past decade.

He said when he first joined Jay Peak in 2004 he was the 47th year-round, full-time employee. And during the winter months, the resort at that time ramped up to about 270 workers.

Now, Wright said, the resort has 312 full-time, year-round employees, with the number of workers swelling to around 1,500 during peak ski season.

About $20 million of the $150 million Raymond James settlement went to finish the Stateside project, which was left incomplete at the time of the filing of the fraud lawsuits against Quiros and Stenger.

Judge Darrin Gayles, who is presiding in the SEC case, approved a modified plan last year for completion of the construction at Stateside. That plan reduced the number of cottages to be completed from 84 to 60 and eliminated the plans to build a medical center.

“Instead, the Receiver is using these savings to build a more comprehensive recreational center as well as soccer and lacrosse fields,” Goldberg wrote in court filing. “The Receiver and his hospitality experts believe that this will help improve occupancy in the slower summer months and in turn increase revenue and profitability.”

The 60 cottages and the recreational center were completed in December.

Wright also talked Wednesday of the number of ribbons that had been cut over the past decade as new infrastructure at the resort opened.

“This is the last on-campus development that we have here,” he said of the Clips & Reels Recreation Center. He added that work putting in the soccer and lacrosse fields will begin in the spring, with an expected completion by Labor Day in September.

“For the staff here there’s a little bit in joy in that, that the ribbon cuttings are coming to a close,” Wright said. “There’s also a little bit of melancholy that this big stage of development is coming to a finish.”