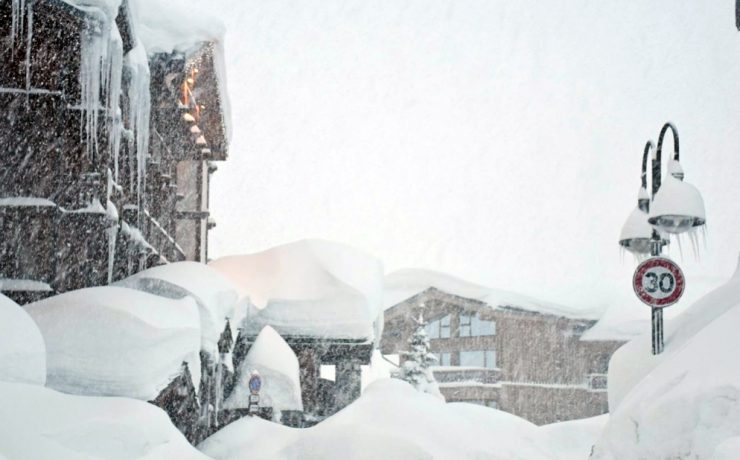 Winter has arrived with a vengeance in the Alps after the biggest storm of the season battered ski resorts across France, Austria, Italy and Switzerland over the weekend. YEsterday high winds caused a multiple gondola pile-up happened at the Hochzillertal ski area near Kaltenbach, Austria.

After a slow start to the ski season, with some resorts having to postpone their openings due to a lack of snow, the tables have turned and now resorts are dealing with too much snow and strong winds, meaning some ski areas have had to close due to high avalanche risk.

“There were significant falls of snow across the majority of the Alps at the weekend, with the being snow pushed down from the north and west. All resorts but the most southern regions were lucky enough to get between 30cm and 100cm,” said John Armstrong from myweather2.com. These include Tignes (60cm), Courchevel (40cm), Verbier (50cm), Zermatt (60cm) and St Anton (30cm).

“Temperatures are dropping fast across the Alps now and it’s going to feel bitterly cold until the weekend when warmer air will push in from the southwest. Things are looking great across most higher altitude areas with fresh tracks available when lifts open to give access.”

Lifts have been closed in a number of resorts, including parts of Les Trois Vallées ski area in France, covering resorts Meribel, Courchevel and Les Menuires. The men’s World Cup slalom race in Val d’Isère, which shares it ski area with neighbouring Tignes, was cancelled on Sunday due to heavy snowfall and winds of up to 100km/h. “Bad news, race cancelled. Good news half a metre of snow forecast so looking good in @valdisere for anyone coming here to ski or snowboard,” wrote Ski Sunday presenter Graham Bell on Instagram.

“Resorts are frantically working with the new snow that’s fallen to ensure at least some resort and access runs have good cover. It’s still a little bit away from Christmas but this new snow has been a welcome relief to many areas that were otherwise mainly green before the weekend,” said Armstrong.

“It’s looking to be a changeable week weather wise with snowfall for the first part, with maybe another 20cm to 40cm of fresh across all but the southern lying resorts, before clearer conditions move in for the second part of the week.”

A large amount of snowfall in such a short period of time, followed by variable weather conditions can be a dangerous combination in Alpine areas. Last winter The Telegraph Ski & Snowboard were out in Tignes when the entire resort was put into lock down due to similar conditions. The season went on to be one of the best in recent history with record snow depths.

By Lucy Aspden, The Telegraph