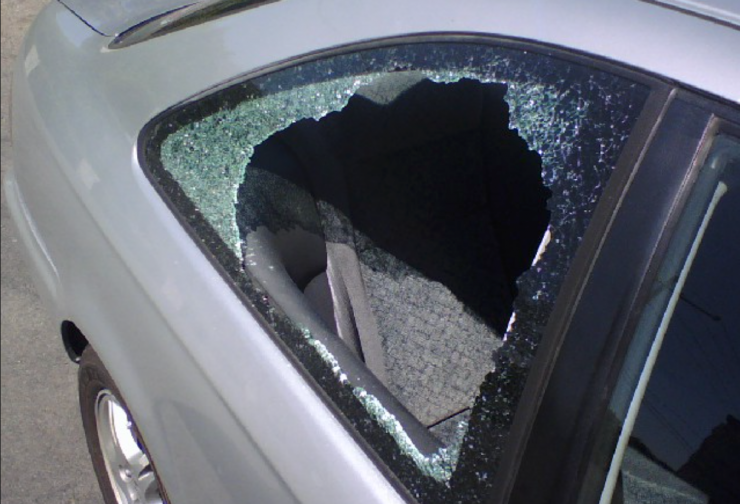 As I drove from Denver to Aspen, there were large patches of canary yellow aspen trees blanketing the steep mountains. There was no snow but the contrasting colors were so beautiful that I ran out of film taking still pictures of the yellow, red and green hillsides along I-70.

I was scheduled to give a speech in Ashcroft Basin, nine miles up a winding narrow road to the south and west of downtown Aspen. As I drove up this winding road, I stopped often so I could get just the right composition of the acres of yellow aspen trees up and down the mountains, co-existing with the dark green pine trees.

About the tenth time I stopped alongside the narrow two-lane road and jumped out leaving the engine running, I was busy composing a picture when a big United Parcel truck came roaring down the narrow road. As you know, those brown trucks are big and square and if they pass close by, they can almost knock you over with their blast of wind.

Fortunately, I was on the other side of my car. Unfortunately, the blast of wind blew my car door shut and when I tried to get back into the car, all of the doors were locked and the engine was still running.

In the old days, I could open almost any car door with a bent clothes hanger. Not so anymore with the burglar proofing of modern car doors. Plus, I was about eight miles from any clothes hanger, except for the one inside the right rear window that held the clothes that I was supposed to wear in about an hour to give my speech to a room full of Microsoft’s business partners.

What would you do in a similar situation?

The road was almost deserted and it was still two miles up the road to where I would give my speech. My cell phone was locked in the car and the next cars up the deserted road would be the people I was supposed to give my speech to.

Logic is mother of invention for me so I just had to decide which window to break and how big of a rock it would take to do this. Should I throw it or take off my sweater and wrap it around my forearm so I wouldn’t cut my arm when I held the rock in my hand and shattered the window? How strong is the safety glass? Would my wife get mad at me if I damaged my new sweater? How hard would I have to hit it? I think these are all logical questions when you have to be somewhere else and are as careless as I am.

I opted to try throwing the rock. First, I decided that I didn’t want to break the rear window on the driver’s side because then there would be broken glass sprinkled all over my dress clothes. I finally chose the rear window on the passenger side, but I still had to take into consideration the long trip back to Denver International Airport in the morning and what if it rained? I decided that cardboard and duct tape could close the opening until I would have to explain the broken window to the rental car agency.

I took a chance on what the broken window would cost and who would pay for it and started my assault on the window. I had to be careful not to do it when a car was driving up or down the road for fear of looking like a thief.

My throwing arm is not what it used to be. I stood back, launched my first rock and missed the car completely. The second rock put a big dent in the front door and the third rock just bounced off of the window.

I finally gave up after two more rocks bounced off of the designated window. At this point, I had to shift to entry by violence. I picked up a three or four-pound rock and gauged my swing quite well for a first-timer in the breaking and entering business. I shut my eyes as the rock came crashing against the glass and while it didn’t shatter completely, the hole was big enough for me to carefully pull away pieces of what remained until the hole was large enough for me to reach in and unlock the door.

An hour and a half later, I had changed my clothes, socialized with some of the guests, eaten dinner and was giving my speech while showing one of my movies.

I really learned a lot on this short trip to give a speech.
1. Renting cars from that particular agency can never happen again.
2. Never leave your keys in your car unless you are in it at the time.
3. I now know how big of a rock it takes to break a car window in a 2003 Chevrolet.
4. My stupidity cost me $832 as I continue to lurch from one near disaster to the next.