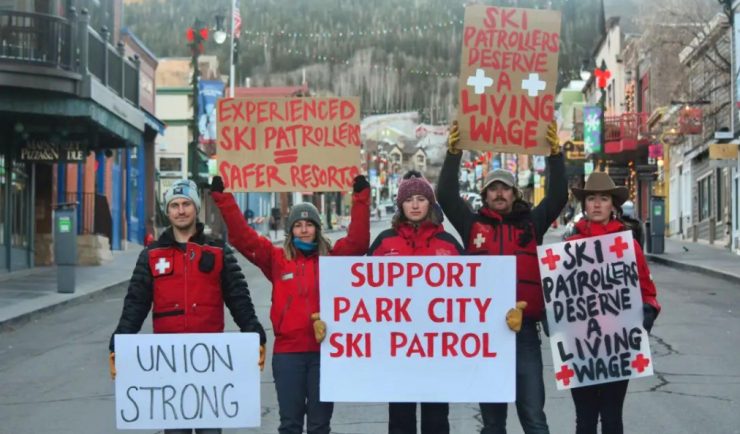 The Park City Professional Ski Patrol Association (PCPSPA) voted to approve a new contract with Vail Resorts (VR) on Friday. The union agreed to a base wage of $15 an hour, with $1 an hour incentive for patrollers who work some shifts out of both Park City Mountain Resort base areas, Canyons Village and Park City. The hourly base wage for first year patrollers had been $13.25.

The PCPSPA membership has previously overwhelmingly said NO to a $15/hr minimum wage and voted the contract down.

The new $16 an hour starting rate is effective retroactively from the start of this season, and patrollers will be eligible for the $2 an hour bonus VR rolled out company-wide earlier this month. The contract runs through April 2024.

The union does not plan to release the vote breakdown. The terms were hammered out in a 15-hour bargaining session, the 50th such session in more than a year-and-a-half of negotiations between PCPSPA and VR. The union had been arguing for a $17 starting hourly wage while VR held at $15.

Under the new contract, average pay for all patrollers is now more than $19 an hour, according to union business manager Patrick Murphy. Additionally, the contract assures wage parity with VR’s Colorado resorts: If wages increase in Colorado for whatever reason, they also increase in Park City.

“We think that’s one of the biggest and best takeaways from this contract,” Murphy stated. “Being able to enter negotiations next time in a position to negotiate simultaneously with our other unionized patrols. That gives us a lot more strength. Solidarity was the best tool we had going for us in this round of negotiations within our own patrol.”

“This was an abnormally long process, and we’re still frustrated with how long it took just to get to where we are now, but we’re happy we are where we are,” he added. “We have to thank all of our patrollers, our friends and family, and the community for having our backs throughout all of this. We couldn’t have done it without them.”

Vail Resorts said: “A lot of time, energy and effort went into reaching this new agreement, which is very consistent with our compensation approach for patrol across all of our resorts, with specific skills-based opportunities that acknowledge the unique aspects of Park City Mountain. We appreciate the engagement from the union’s bargaining team and want to reiterate our tremendous respect and admiration for our patrollers and all of our employees at Park City Mountain.”