Many years ago when everything was cheap by today’s standards, it still took ‘x’ hours of hard work to earn ‘x’ amount of money. In the early 1960’s I could still buy a basic Volkswagen Bug for under a thousand dollars in Munich. I did just that five or six years later when I went over there to film. I would get a ninety day note at the bank, pay cash for the car, drive it for a month or so in Europe, then send it home and sell it for more than I paid for it six or seven weeks after I bought it, while having free transportation in Europe.

Everything I purchased in those days, you can just add a zero or two to the same thing you bought then and today you add the zero and then double the price. A five-dollar a day chairlift ticket in 1956 would cost fifty dollars. Multiply by two to buy a lift ticket today.

Driving in Europe then was on narrow, winding, two-lane roads in the 1950s. I found my way across Austria, into Italy and finally to Yugoslavia to enter a Communist country for the first time. Marshall Tito ruled it. I was nervous because I spoke not a single word of their language and I was going to a ski-flying tournament.

Planicia already owned the world’s record at 416 feet. The scaffold was scary just to climb up and look down the in-run. As I stood up there a few days before the tournament started, I could not begin to imagine the courage it takes to go as fast as seventy miles per hour and launch into space!

Ski flying, as it became known, instead of ski jumping, was when a jumper started approaching the then mythical, four hundred foot mark. The ski flying technique began to change as the flyer started holding their hands at their sides instead of stretched out over their heads. The skis, parallel beneath them, still had not evolved to the tips wide apart for more lift and thus longer flights.

I snagged a hotel room with breakfast and a private bath in the best hotel in Planecia for six dollars a night. The countryside was dirt poor under the Communist regime, but the ski-flying tournament brought welcome outside currency to the country for the once a year use of this massive hill.

In the press room at the hotel I was told that Marshall Tito would attend the tournament, and I was always eager to get unusual shots to share with my audiences all over North America. I found out the path that Tito would take to get to the judge’s stand. No ski lifts of course there in those days. 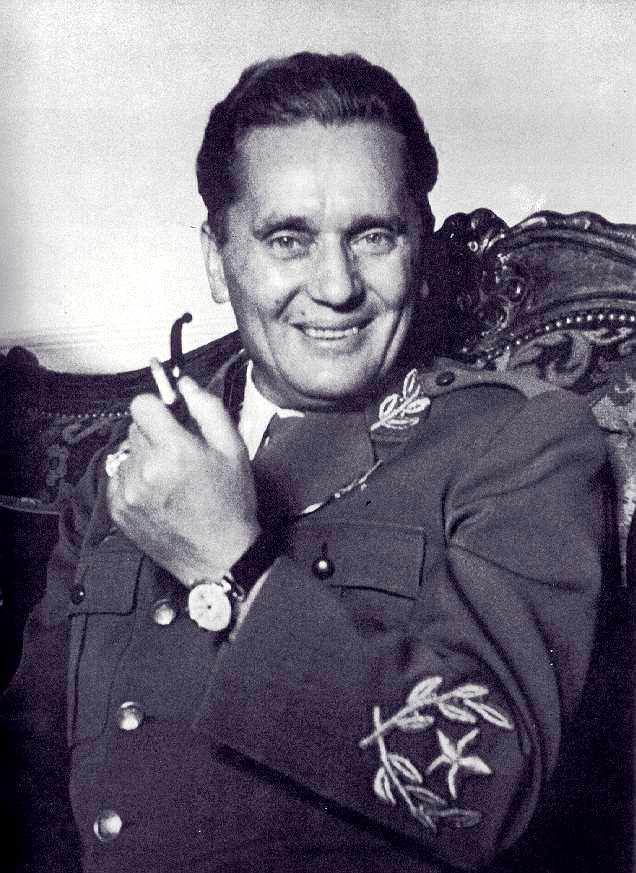 I scoped out a dozen good spots to film the tournament and then found some trees I could hide behind and get up close and personal photos of Marshall Tito and his bodyguards as they walked by headed to the judges stand. Sounded ok with me.

I had my moving around path during the tournament memorized and rehearsed so I could make the audience believe that there were at least a dozen cameramen on the job.

Once I did that, I settled down with my tripod, camera and about twenty rolls of 16 mm Kodachrome that I would later apply images to during the event. I was standing there munching on a Yugoslavian version of Bratwurst, and great fresh bread when I heard a lot of commotion and noise moving up the path towards my hiding place.

I had a mouth full of Bratwurst when a sharp jab in my back, which was accompanied by the definite click of metal against metal. An automatic rifle got my immediate attention.

“Hands above your head”, sounds the same in any language. I didn’t even have time to make sure my bratwurst landed on my rucksack. Fortunately, I had a big press badge in plain sight as I reached as high as I could with arms over my head. Fortunately, one of Tito’s advance bodyguards could speak a little bit of English. My photo of Marshall Tito had to be one of him in the judge’s stand waving at the not so adoring crowds, after all.

After they examined each roll of film carefully and did a complete body pat down for hidden weapons I still had to move out into plain sight on the flat spot at the top of the landing hill.

Yugoslavia is a beautiful country and it was easy to see why the people did not want to immigrate to anywhere else in spite of the Communist conditions they had to live under. I settled down to a fabulous day of scrambling hard and fast to get as much footage as possible of courageous men from all over world flying over four hundred feet. There was an occasional dangerous wind gust but the tethered helium filled red balloons made the jumpers aware of clear air turbulence.

The world’s record holder was hit by a gust of wind while in mid-flight and he landed on his side and bounced twice. He was unconscious when the medics reached him after he slid most of the way down the landing hill, bouncing like a rag doll. He landed out beyond the three hundred foot mark when he hit the first time.

With new ski flying techniques, the hill record was broken a dozen times that day until it stood at 416 feet. That record stood for many years, until the wider apart ski tips began to be developed and the flyers were already holding their arms and hands at their sides, with their hands controlling their flight path like the ailerons of an airplane.

In the 1960’s, I got a lot of my basic shots with a lot of unusual images to share the following winter. However, I was quite surprised this week to find out that last year on a ski-flying hill, the world’s ski-flying record is now at 239 meters. That is a lot longer than two football fields and a few end zones. That record is over seven hundred feet through the air. I think some of the freestylers of today should go to one of these ski-flying hills and see how a seven hundred foot flight feels like.

On my trip from Planicia back to Innsbruck, I must have gotten on the wrong highway because suddenly I had to go down a hill that had a warning and a forty-degree sign. I put my beetle into low gear and was surprised halfway down the long hill when a Mercedes Benz dump truck was struggling up the hill in compound low. When I got to the bottom, I parked and looked back up at this Yugoslavian highway to the clouds. I took a picture of the road sign indicating the forty-two degree, Yugoslavian highway to the heavens. It would make a great downhill racecourse for skateboarders if the asphalt were not so bumpy.

As much as I would like to return to Planicia again, I have enough memories in my brain not to have to pack another suitcase!