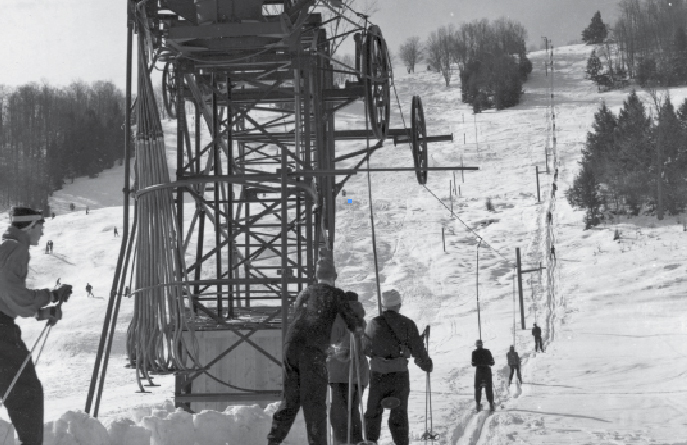 Vermont’s Suicide Six’s is about to be “woken up” in an attempt to become politically correct. Suicide Six ski area will retire its name this summer due to its perceived negative connotation, a new name has already been determined and will be announced in the coming weeks.

Is this April fools? Warren Miller would be outraged with the political correctness. Ski the World believes that this is another episode of political correctness gone mad. Suicide Six’s ski and race history is important, more so that other ski resort in the US and in our opinion, its iconic name should be retained – Suicide runs will always be part of ski culture.

Suicide Six’s claim to historical fame as the earliest ski resort derives from the installation, in January 1934, of an improvised rope tow, the first ski lift (uphill conveyance) in the United States, on a hill located on Clinton Gilbert’s farm. The rope tow was originally powered with a Ford Model T engine. By the following month, Wallace “Bunny” Bertram (a former ski coach at Dartmouth College who had helped build the original rope lift) took over the operation, and installed a more reliable electric motor. A few years later he moved his operation to a steeper hill nearby, shown on the map as “Hill 6”. Bertram once joked that to ski down the nearby Hill No. 6 would be suicide. Two years later the resort was opened using this name and photos of Bertram can be seen in the resort museum in the base lodge. Devotees of ski mountaineering and backcountry skiing mark this as the beginning of the divergence of resort skiing and traditional backcountry skiing.

Suicide Six is host to the longest running ski race in North America, The Fisk Trophy Race. It was first held in 1937 and is a rite of passage for serious eastern ski racers. Notable past winners include Bode Miller, Chip Knight, Jimmy Cochran, Shane McConkey, and many other Olympians, US Ski Team members, and NCAA Champions.

“Our resort team embraces the increasing awareness surrounding mental health and shares the growing concerns about the insensitive nature of the historical name,” said a statement from the ski area. “The feelings that the word ‘suicide’ evokes can have a significant impact on many in our community.”

The name change is being made “with great care and respect,” the ski area added, noting that the new name was developed through research and community outreach. “It is vital that the name better represents and celebrates what makes [the ski area] a beloved and vibrant part of this community.”

The ski area has been operating under the name Suicide Six since 1936. The name, according to the resort’s website, came from Dartmouth College ski instructor Wallace “Bunny” Bertram, who often joked that skiing the steep pitch of Hill No. 6 would be suicide.

“Though some may find the change difficult, we stand by our conviction that this evolution is warranted for an iconic treasure and, more importantly, necessary to continue its rich history of inclusion and accessibility.”