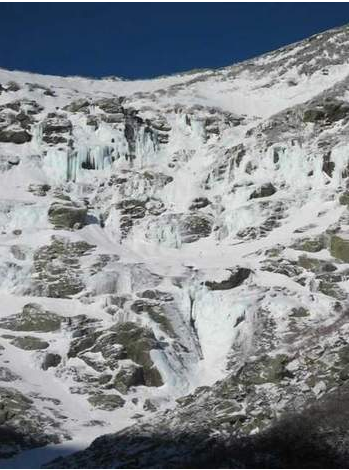 Two hikers became disoriented descending from the summit of Mount Washington, took a wrong turn and triggered an avalanche that swept them 800 feet to the bottom of Tuckerman Ravine Saturday, the U.S. Forest Service said.

Snow Ranger Jeff Lane, a member of the rescue party, said it was a miracle the pair survived and their injuries were not worse. One hiker suffered a broken arm; both had an assortment of trauma injuries, he said.

“The snow they were in may have actually provided some padding,” Lane said Sunday. “They were very, very lucky.”
The two were identified as Adam Herman and Connor Lodge, both from Oak Bluff, Mass.

Forest Service officials said the avalanche should prompt winter and spring hikers to be aware of the dangers of creating an avalanche by being in the wrong place at the wrong time.

The hikers were members of a four-person party descending after reaching the summit of Mount Washington.

The group included three from Martha’s Vineyard and one from Connecticut. They became separated into two groups of two hikers after snow driven by winds in excess of 50 mph created white-out conditions.

It was the two forward hikers who ran into trouble.

“Even experienced hikers become disoriented and do not know where they are during a white-out,” Lane said. “They took a wrong turn. They went down into Tuckerman where it was steep with a lot of wind-blown snow.”

That turn brought the pair to the slope known as “The Lip,” where recent weather conditions created the serious potential for an avalanche. A rainy thaw earlier in the week was followed by heavy snowfall with significant wind-blown drifting of the snow. The result was several inches of snow piled atop a slippery crust of ice.

Lane said at around dusk Saturday, the hikers turned onto a vulnerable spot, bringing them tumbling down the mountainside in a sea of snow. The avalanche swept the hikers some 800 feet to the bottom of Tuckerman Ravine. The plummet ended near the area known as the “lunch rocks.”

Lane said the speed of an avalanche can reach 60 mph. Last March, a 24-year-old ice climber from New York was swept up in an avalanche and killed on Huntington Ravine.

In his report on Saturday’s incident, Snow Ranger Christopher Joosen said the hikers were quite fortunate.

“Throughout history there have been a number of very lucky people in the world,” Joosen said. “There are now two more of them.”

“The avalanche was on a slope called ‘The Lip,’ where an avalanche is likely,” Lane said. “They were heading back up an adjacent slope, ‘The Sluice’ which is very close by the Tuckerman hiking trail.”

Once the duo was located by members of the rescue team, specialized hiking techniques were used to help the two hikers off the mountain so they could be taken to Memorial Hospital in North Conway.

Information about current avalanche warning conditions is available at www.mountwashingtonavalanchecenter.org which also has advice about recognizing areas with avalanche potential and information on basic and advanced courses in recognizing avalanches and avoiding their dangers.

The avalanche danger scale, ranging from low to extreme, was initiated about three years ago.

In addition to the Forest Service rangers, the Mountain Rescue Service, International Mountain Climbing School, Appalachian and Harvard Mountaineering clubs, Androscoggin Valley Search and Rescue as well as private hikers aided in the search and rescue. 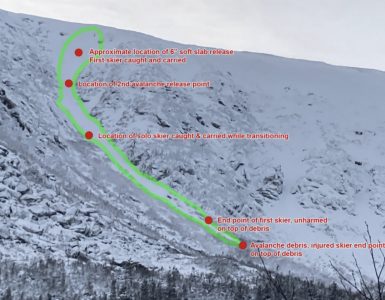 On December 5 at approximately 12:00 pm a skier triggered a shallow soft slab avalanche near the top of Left Gully. Left Gully is one of several steep avalanche chutes at Tuckermans Ravine, Mount Washington, New Hampshire. The skier was caught and... 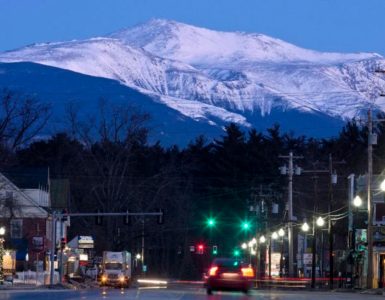 Tuckerman Ravine is a seasonal spring passage for many Eastern skiers. On spring weekends with good weather, hundreds — sometimes thousands — of skiers flock to Mount Washington, New Hampshire. This famous backcountry area has some of the steepest... 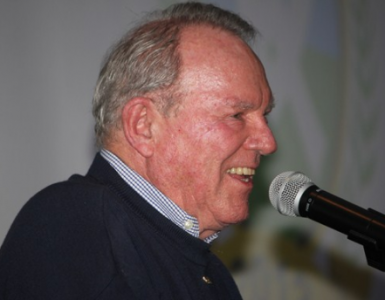 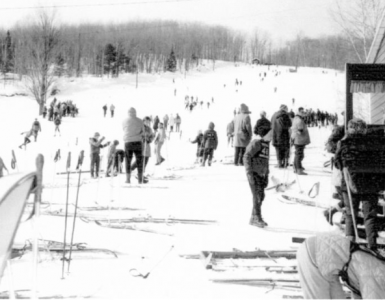 free skiing and snowboarding for all. Guests must sign a waiver, and the area is suggesting a $5 donation per day.