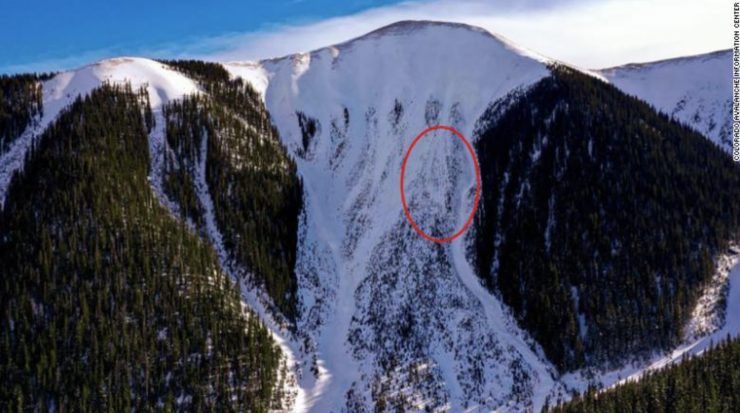 Three skiers lost their lives to avalanches over the weekend during an “especially dangerous” period in Colorado’s popular backcountry, officials said.

On Sunday, the bodies of two backcountry skiers were recovered from an avalanche in the North San Juan zone after they were found buried by the snow, according to the Colorado Avalanche Information Center (CAIC). The red circle in the above image indicates the area where two skiers were found dead.

They were reported overdue from their trip on Saturday, and that’s when rescuers discovered what happened.

“The pair had planned to ski in an area locally known as the Battleship, southeast of Ophir Pass. In the dark from a helicopter, rescuers could see a large avalanche and ski tracks,” the CAIC said in a news release. “San Juan County Search and Rescue and other agencies recovered the bodies on December 20.”

Similarly, on Friday, another skier was recovered after he was caught, buried and killed in an avalanche in the Gunnison zone, according to a news release from the CAIC. The skier had spoken with two other skiers about their descent plans, but when the pair returned to their snowmobile they realized the victim’s snowmobile was still there. CAIC officials said the two backtracked his route and discovered a fresh avalanche. The skier was found but he did not survive. “Local volunteers and Crested Butte Search and Rescue facilitated the recovery and extrication,” said the CAIC.

Since December 15, there have been over 220 reports of avalanches in Colorado’s backcountry, according to the CAIC, and most of the zones are ranked “considerably dangerous” for avalanches on their avalanche forecast.

Ethan Greene, Director of the CAIC, said that “this is not a normal year, it’s been unusual conditions causing avalanches so far.”

“Since Friday three Coloradans lost their lives in avalanche accidents, and 132 avalanches were reported. One hundred and eight avalanches were triggered by people in the last week” said Ethan Greene, Director, Colorado Avalanche Information Center. “More people die in avalanches in Colorado than any other state, and this year conditions are especially dangerous.

This is not the landscape-changing event we saw in March of 2019, but it is the weakest snowpack we’ve seen since 2012. People need to recognize we have unusual conditions and their usual practices may not keep them out of harm’s way. As we gain more snow in the coming weeks, avalanches could become even more dangerous. We urge everyone to check the avalanche forecast before you plan your day in the mountains , particularly as we enter the holiday season.”

The CAIC is urging people headed to the mountains to exercise extra care in the mountains and pay special attention to the avalanche forecast.