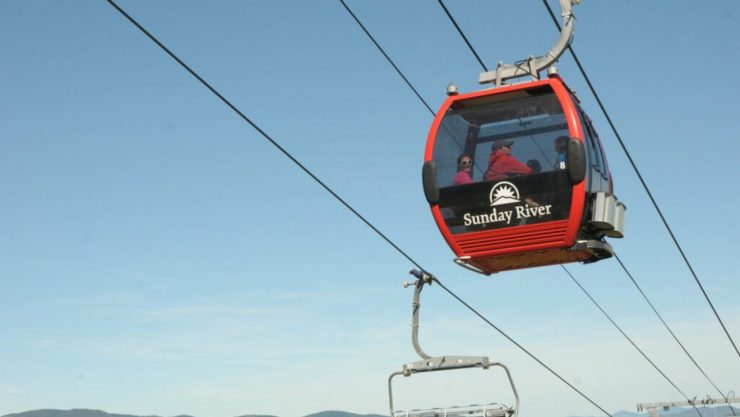 A strong wind gust caused a gondola cabin to misfeed into the top terminal and detach from the haul rope of the Chondola lift at Sunday River, Maine. The cabin fell approximately 10 feet to the ground.

The 17-year-old guest inside sustained minor injuries and was released to a parent after being transported to the base and assessed by ski patrol.

Due to increasing winds, the lift was being unloaded and running at half speed under high wind protocol at the time of the incident. All guests remaining on the lift were safely unloaded and night skiing operations were suspended.

The Chondola—a combo lift with a mix of six-passenger chairs and eight-passenger gondola cabins—serves Sunday River’s North Peak area. The chair fell at 5:37 p.m. on Tuesday, Feb. 23 when Sunday River was open for night skiing.

A spokesperson said the lift was stopped for about 25 minutes after the cabin detached. The four remaining guests on the line, who were riding together in another gondola cabin nearing the upper terminal, were safely unloaded when the lift restarted at slow speed. The lift closed and night skiing operations were suspended.

The damaged gondola cabin was transported to the resort’s maintenance facility for inspection. The Chondola will remain closed until an investigation into the incident is complete.

We’ll keep you posted on developments as they are reported.