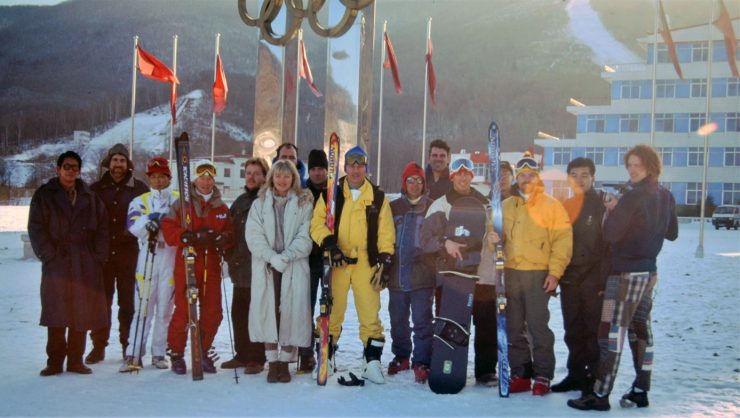 With the Winter Olympics happening this month in China, skiing there has not always been that accessible. Around the late 1980’s some “closed border” countries starting approaching Warren Miller for tourism exposure. Their “ulterior motive” was to have the footage possibly position them to secure the Winter Olympics.

The former USSR let Warren Miller film there in 1989 and they eventually got the Sochi Olympics in 2014. We filmed Northern India in 1993, but still no Olympics. In 1996 Warren Miller filmed a sequence in China and the rest is history.

Warren Miller filmed the skiing sequence about 600 miles Northeast of Beijing (near Jilin) in a very remote area called Beidahu. At the time, pre-internet, there was zero inform available to the West on what the the mountains looked like or what to expect for ski terrain. The infrastructure there was terrible at the time; with no snow making, terrible accommodations, etc. But, they had a dream and had built a massive Olympic symbol at the base of the ski hill.

The trip was organized by Willi Vogl, Brian Sisselman was the cameraman, Derek Hite was the snowboarder and Brad Vancour was the skier. They were the first North American’s to visit China and ski/board. China allowed them to bring a small group, so they invited a few lucky VIP tag-alongs on this first ever China ski trip.

Brad Vancour commented, “Ironically, the skiing for the 2022 Winter Olympics is being held about 80 miles Northwest of Beijing in an area no where near Beidahu. The only thing in common is that there is still no snow, so they are relying 100% of man made snow.”

You can watch the original 1996 China Footage in WME “Snowriders 1“.