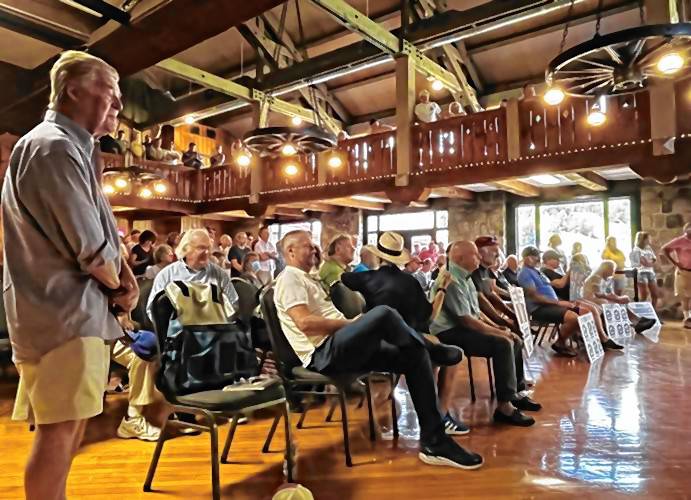 The Gunstock Mountain Resort senior leadership team is back to work today after the Belknap County Delegation voted 9-1 to accept acting Gunstock Area Commission (GAC) chair Dr. David Strang’s resignation following the appointment of Denise Conroy to the GAC at an emergency meeting last night.Gunstock full Strang has been a central figure in recent turmoil between the GAC, which manages Gunstock and approves finances, and the boots-on-the-ground leaders of the resort.

General manager Tom Day and his team of six directors all resigned at the outset of a July 20 GAC meeting, following months of escalating tensions between Gunstock staff and new members of the commission. The resort, which offers several summer activities and attractions, has not operated since.

Day and his team will get to work right away in preparing for SoulFest, a large Christian music festival at the resort taking place Aug. 4-6. “Our first priority is to get ready for SoulFest,” said Day. “That will require all hands on with the pedal down the entire time. Then we will open the adventure park on Thursday. Finally, we will work towards opening for our winter season on December 10.”

The senior team had said they would return to work if commissioners Peter Ness and Strang resigned. In the past week, the Belknap County Board of Commissioners—a three-member board that oversees county departments and funds—called for Ness and Strang to resign, and the remaining Gunstock management team and staff wrote an open letter to the county delegation calling for Strang’s ouster. “The remaining Gunstock management team and staff would like to put forth a unanimous vote of No Confidence for Commissioner Strang” for his “failure to honor his oath of office and make decisions in the best interest of Gunstock, its employees, and the Belknap County community,” the letter said

Ness, who was the GAC chair, resigned on July 29, as reported by the Laconia Daily Sun. Last night, Strang ultimately committed verbally to resigning, but only after a new commissioner was chosen by the county delegation so that the group maintained a quorum. In addition to accepting Strang’s resignation, the county delegation voted unanimously last night to also accept the resignations of Ness and former commissioner Gary Kiedaisch. Kiedaisch resigned in solidarity with the mountain’s leadership team at the July 20 meeting. With the appointment of Denise Conroy, there are now three commissioners on the five-member GAC.

Last night’s outcome avoided a potentially perilous situation for Gunstock. Without senior leaders in place to oversee the safe operations of the property, the resort’s insurer, Safehold Special Risk, said it would consider dropping Gunstock. The execution of SoulFest, which attracts roughly 6,000 attendees, was also in jeopardy, risking legal action by the event’s organizers against Belknap County, which owns the resort. And if senior leaders weren’t rehired immediately, preparations for the 2022-23 winter season would be delayed, likely putting winter operations at risk.

The meeting was the latest in a series of dramatic events surrounding Gunstock Mountain Resort, reportedly driven primarily by the actions of the Gunstock Area Commission. The county delegation, comprised of 18 state representatives, is responsible for appointing commissioners. Led by chairperson Rep. Mike Sylvia, the delegation has recently picked commissioners that are political allies who support their agenda, according to NHPR.

Gunstock’s proposed master plan has also been a source of contention. In mid-January 2022, the GAC approved the resort’s proposed plan, first presented by Day and Claire Humber from resort planning firm SE Group in December 2021. Ness was the only commissioner to vote against the plan then. Since January, though, the GAC has turned over entirely.

The $54 million “vision for the future”—which includes terrain expansion and new chairlifts—”articulates a long-term vision, and was presented within the context of intentional, methodical growth,” according to Humber. Any future expansion hedges on the resort being in a solid financial position and strong visitation indicators showing that it can maintain a sustainable operation as it grows, she said.

Part of the proposed plan includes future expansion onto property that Gunstock does not own. Humber and Day noted during their December presentation that much more planning and analysis was needed to vet the ideas presented in the plan, especially the expansion into neighboring property.

According to notes from the GAC meeting on March 1, this element was a major reason why the commissioners voted to halt all work on the proposed master plan. That meeting was Strang’s first as a commissioner. He and Ness voted to stop approved capex spending, too.

New commissioner Denise Conroy, a business executive with more than 20 years of professional experience, only entered the fray after attending the July 20 GAC meeting, her first. Following that meeting, Conroy penned a pointed letter to the editor in the Laconia Daily Sun, calling Ness, Strang, and commissioner Doug Lambert “extremist” and their recent actions “appalling.” Conroy joins Lambert and commissioner Jade Wood on the GAC.

Former Attitash and Wildcat, N.H., general manager John Lowell was among the other applicants who expressed an interest in joining the GAC Monday night, but did not receive enough votes from the delegation.