US women made history in Semmering 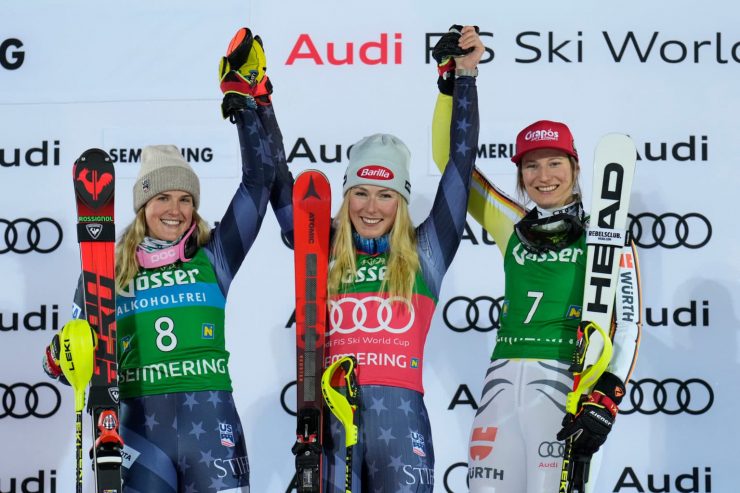 There is nothing quite like a night race, and the Semmering edition was set up to be very exciting. A race finish area filled with Austrian fans having a party and a beautifully comfortable evening. These fans love the sport and cheer for every competitor with conviction. Neither the race nor the amazing Mikaela Shiffrin disappointed them.

One of the skiers the fans love the most is Shiffrin, and Shiffrin delivered amazing entertainment for the third consecutive day. At the top of the second run, Shiffrin did relinquish some of her first-run lead but found her speed at the bottom to win her 80th career World Cup and her third slalom of the season. The 80 victories are amazing, but four victories in a row, in three different events, is impossible, meaning ski racing just witnessed a miracle.

Shiffrin remarked, “The coolest thing about tonight is coming through the finish and seeing Paula. It’s a pretty special thing to share a podium with a teammate. I have experienced it several times in my career, but not in slalom. It is amazing. I know how hard I work, and I know how hard Paula works. I know how much she wants it, so it is amazing… Happy New Year.”

“Paula had a ripping run, I saw that from the start. I thought she might win this race. It’s so special to share a podium with her,” Shiffrin said. “I don’t have much to say about 80, I don’t know what to say.”

And Shiffrin’s win in the night race made her the first ski racer with 50 World Cup wins in a single discipline. No other skier, female or male, has won an event more than 46 times in the 56-year World Cup history.

Leaving the start with only two competitors to ski and only a 0.01 first-run advantage over the leader in the finish USA’s Paula Moltzan charged hard and left nothing to chance; she crossed with a 0.05-second lead. This guaranteed Moltzan her first career individual podium. The very emotional Moltzan then took the leader’s chair to watch the two fastest women from the first run. When Sweden Anna Swenn Larsson crossed tied for fifth, Moltzan knew she was no worse than second.

However, it was Shiffrin who was remaining at the start. Shiffrin is as hard to beat as any human that has ever skied and a confident Shiffrin is nearly impossible to overcome. In the end, Paula Moltzan validates she is the world-class skier that many know she is. Congratulations to Moltzan on her first career individual podium.

“I stopped wishing for things about three years ago,” Shiffrin said about the possibility of breaking Vonn’s record. “I am just here for the skiing, being able to do it with my teammates, and the amazing crowd and amazing people around, I couldn’t even dare to wish for that.”

Moltzan achieved her career best with her parents watching from the stands at Semmering. 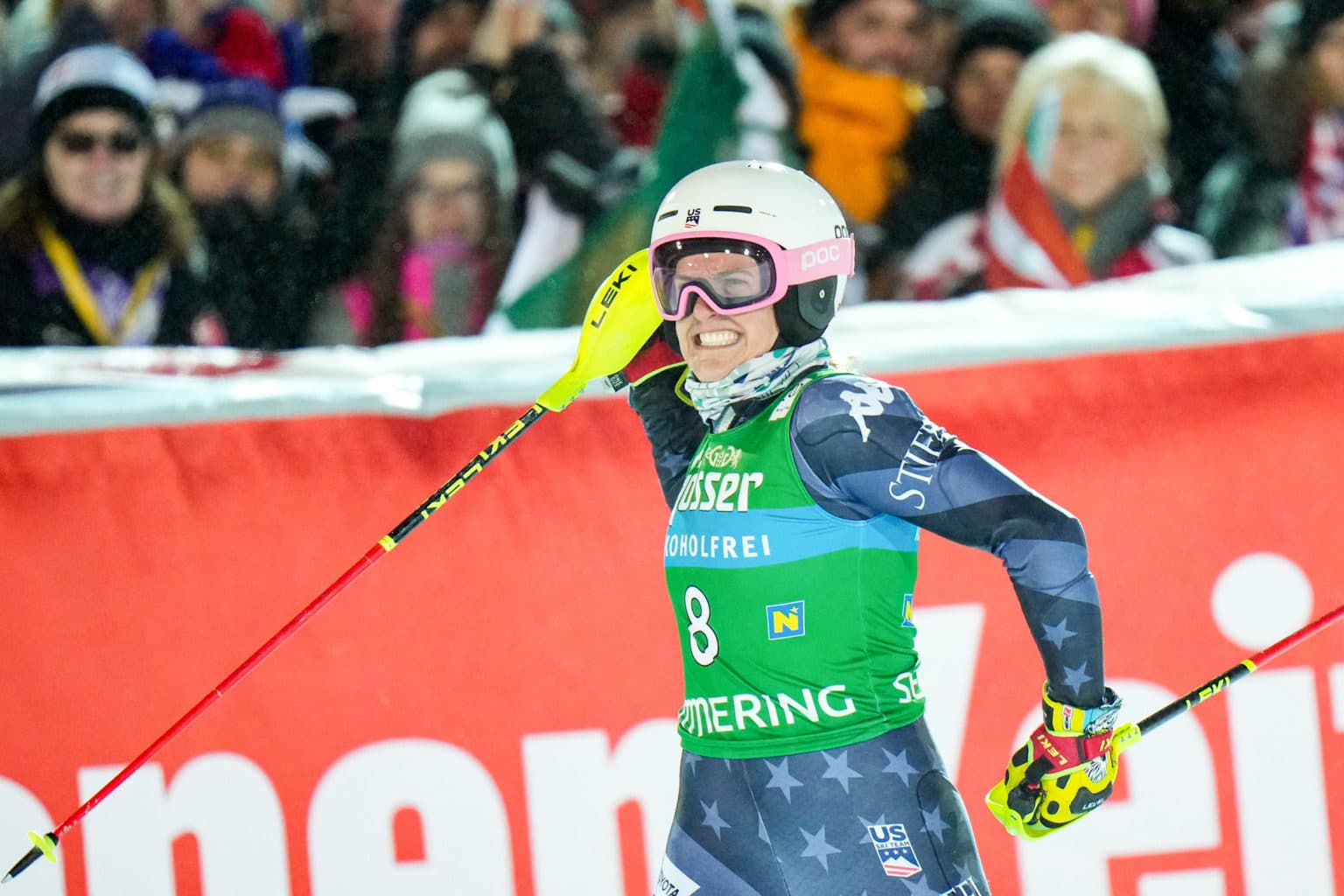 “I obviously couldn’t be more proud of myself and the whole team, and even better to do it in front of my parents,” said Moltzan, who previously had a second-place finish in a parallel event two years ago.

“So, we made history. We have a big team and all the girls are so fast, so it will only be days or weeks until they are really showing exactly what they can do on the hill, as well.”

The slope was far from perfect when the first run leaders took to the start. That said, these are the best women in the world and they answered the challenge. First, two-time winner Wend Holdener crossed with a 0.11 seconds lead, then reigning World Cup slalom champion Petra Vlhova took it away. Skiing the grooves with exceptional skill, Germany’s Duerr crossed with a better time than Vlhova. Duerr would finish third on the podium.

However, the crowd comprises Austrians who would use most of their energy to inspire their own. An Austrian who got the message was Franziska Gritsch. 23rd on the first run, she crossed with an inspired second run and watch the next five racers before relinquishing the lead. When the race was over, she had moved up nine spots on the leaderboard and finished 14th in the race. Unfortunately for the adoring fans, the other three Austrian women who qualified for the second run moved down the leaderboard on the second run.

The first US athlete to attack the final course was Kaite Hensien. Hensien experienced difficulties at the top of the course but skied her best at the bottom. She crossed with the lead, said hello to her mom through the camera, and got comfortable in the Audi finish leader’s chair. The leader’s chair is a thrill for any emerging skier, even if it doesn’t last long. In this case, two racers. However, when the race was completed, Hensien had moved up eight spots, finishing the slalom 21st.

Five North American athletes scored World Cup points in the Semmering night slalom. The two on the podium, Shiffrin,1st, and Moltzan, 2nd. The two Canadians, Amelia Smart and Ali Nullmeyer, finished together in 15th and 16th. And as mentioned, Hensien finished a season-best 21st.

“I made some good solid turns today and I’m happy with the race,” said Smart. “We have a big block of races coming up with three races in the next ten days or so and I’m excited to build off of this. 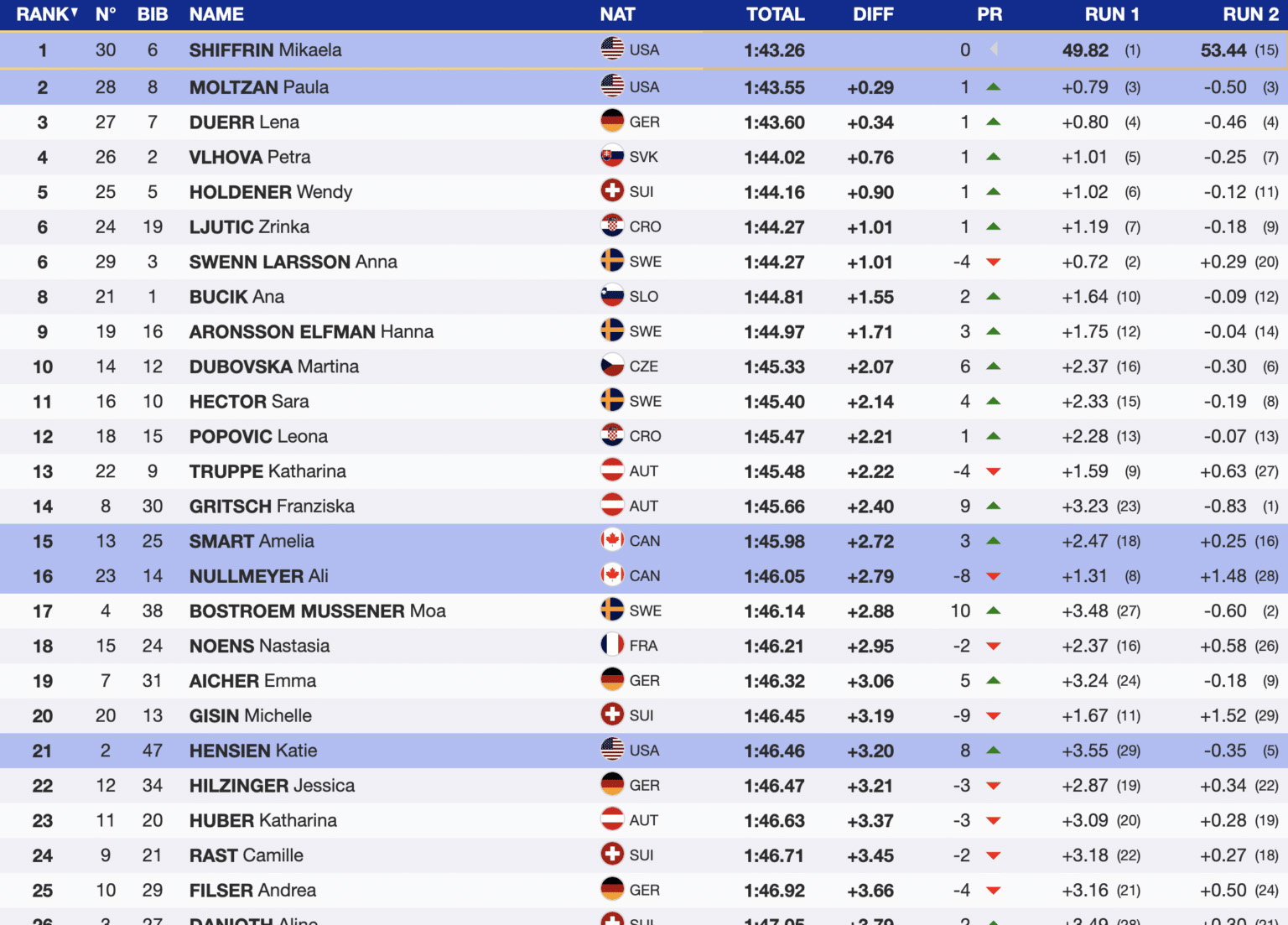