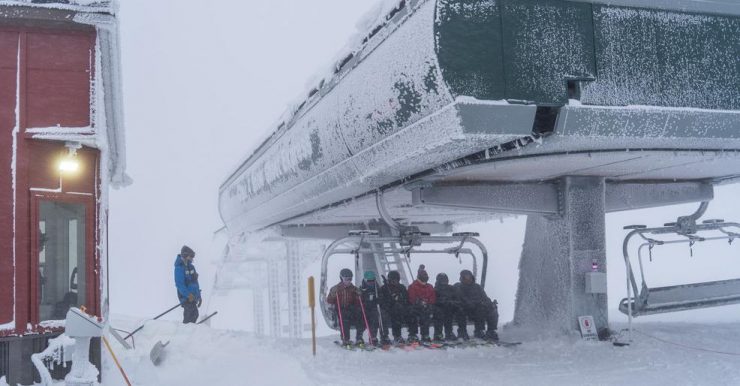 The new Chair 4, dubbed the Snow Ghost Express, began shuttling skiers and snowboarders from the Base Lodge area to the top of Inspiration Ridge on the morning of Friday, Dec. 30, after a ribbon cutting ceremony.

“I’m very excited about our new Chair 4,” said former resort President Dan Graves, who initiated the project. “It’s been a four-year process and to see it now running is a dream fulfilled. I think our guests are going to love it.”

The Snow Ghost Express replaces the old Chair 4, a much smaller lift that was installed in 1978, before the Base Lodge became the primary entrance to the resort.

The new lift provides better access to terrain on the front and east sides of the mountain that previously was underutilized. It also enables guests to reach the upper mountain from the Base Lodge more quickly, without a layover between Chairs 6 and 1. That, in turn, reduces traffic on other lifts as well as beginner terrain, improving the experience for guests of all ages and skill levels.

“We couldn’t be happier to see this project completed before the new year,” said current President Nick Polumbus. “This was a massive undertaking that presented plenty of challenges, but we know it will have a big, positive impact on the way folks experience this mountain and that makes it all worthwhile. We expect this investment will pay off in the form of shorter lift lines and better use of all types of terrain.”