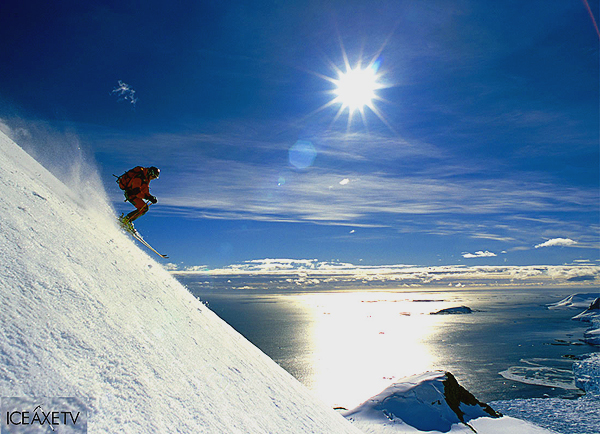 I have skied in the last ten years in the Himalayas of northern India, Manchuria in China, South America/Antarctica, Japan and of course all over Europe.

The most exotic exiting and dangerous trip was Antarctica. It took me almost a year to produce this sequence, but I was lucky, because I ended up with the best crew in the business. ANI (used to be based in Vancouver), now operates out of England, put together, directed and managed the expedition. They supplied us with the most experienced and qualified air support. Our pilot was Henry Perk with Borek Air out of Calgary ( it took six days to fly the plane down to Punta Arenas). He flew a Twin Otter and knew how to get us in and out save. He had at that time five thousand flying hours in Antarctica, he was Helicopter skiing guide and rescue pilot in the Swiss Alps and he found the most incredible place for us to ski in Antarctica.

Our mountain guide was Gordon Wiltsie who knows that continent better than anyone else. With Henry and Gordon we had the best support team. Our own crew was also the best. Camera man and director was Brian Sisselman and second cameraman Bill Heath, skiers Mike Farny, Kevin Andrews, Tom Day and I. North Face provided us with all the gear we needed for this extreme expedition and Head build us some special skis to hold on ice.

Our flight from Punta Arenas across southern Patagonia to our staging place to Kings Island was spectacular. It’s a five-hour flight with a no returning point. We actually had to return to Porto Williams, because the snowstorm on Kings Island was to severe for us to land, so we waited it out for about six hours and tried it again and made it, but barley the ceiling was so low we where just skimming over the waves of Drake Passage.

The next day Gordon, Brian, Mike and I took off with Henry to scout for our place to do our shoot. Henry had a place in mind and after flying for about two hours, again below the low ceiling and dodging icebergs along the way, we finally pop trough the clouds and in front of us was the most incredible glacier with a huge mountain appr. 9000 ft. high about 40 km from the glacier icefall into the ocean. We found a landing place relatively free of crevasses and Henry put the plane down with skis in the snow after several passes to pack the landing strip. We unloaded and Henry went back to pick-up the rest of the crew. We spend the rest of the day to set up camp. The most import part was to build a snow wall to protect the camp from the prevailing winds. When we where doing this it was beautiful calm and sunny and we said to Gordon … do we really need to do all this? He told us to finish this job and even make it a foot higher. We sure found out soon that our tents would have been goners with out the wall.

The next day, sunny and calm again, we climbed the big 9000ft unnamed and never climbed mountain. It was an amazing experience for me, because the gang let me the first to summit. The views where unforgettable one direction ocean full of gigantic icebergs, the other direction the Detroit plateau with huge ice avalanches roaring down every half hour. Ski this mountain was extreme everything from steep and deep powder to blue ice.

Day two showed us why we build the wall. Is was blowing and snowing non stop. We had enough food for a month, but we only had plans to stay for two weeks and there were no forecasts for improvement. So we started to ration our food. After seven days we got a little worried. On day eight the wind died and the snow was till coming down.

Day ten it stopped and it was clear. We got in the plane; Henry flew us to a mountain further up the glacier. It was perfect, 35 to 40 degree steepness, 4000 to 5000 vertical feet and big ice boulders all over the place. He landed us on top and we had the run of our life, filming all the way. Immediately after we flew back to our camp, packed up and moved further south to a penguin colony, skied with the penguin for a couple of hours and flew back to King George Island. The bad weather was chasing us again; we just made it back to Punta Arenas before all hell broke lose. We made it out with an hour to spare. There was a Korean sience expedition trying to leave shortly after us, didn’t make it and apparently got stuck there for over three week.

We where incredibly lucky, everything in the end worked out as planned. We where the first ones to have alpine skied in Antarctica. 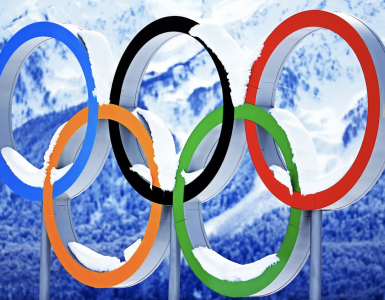 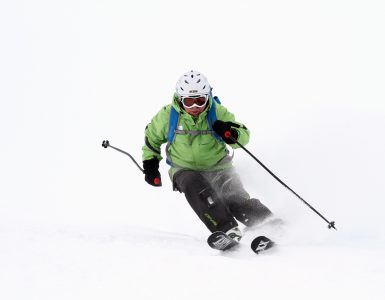 By Willi Vogl I’ve been skiing almost nothing but bumps for more the 40 years. Warren Miller told me… you’ve got only some many bumps in your knees and when the time is up, your done… Well mine where done about ten years ago. The cartilages in my... 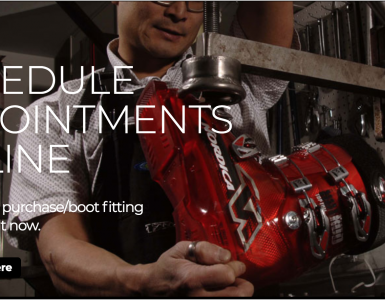 Fanatyk Co Skis & Bikes are without a question the best boot fitters in Whistler. Their Mission is to provide customers with the World’s best ski and bike products and services. They continually strive to be the best in the industry with... 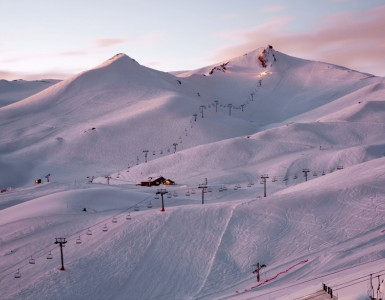 I had a good time and I ‘m glad I got it off my bucket list. But considering the cost of the trip, I think I could have spent my money a lot better elsewhere. 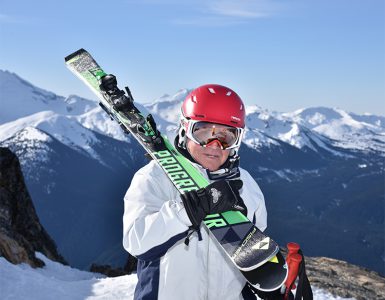 I got my first pair of skis for Christmas when I was 10 years old. At that time wooden skis were being made for 25 years. Over the years I have been skiing on wooden to Aly (metal skis) on to the fiberglass and now on titanium and carbon skis. In... 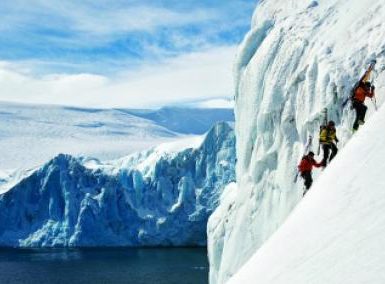 My dream was to be the first to explore, climb and ski an uncharted mountain in Antarctica. Warren Miller, his son Kurt and Kurt’s partner Peter Speek gave me the go ahead. The expedition was featured in Warren Miller’s film “Extreme Winter” and on...